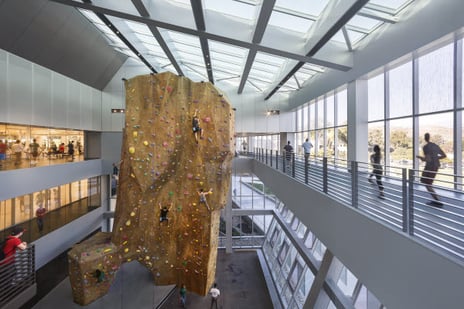 Recently I was speaking with a guest at our San Diego Open House about one of the most hyped statements from architectural firms today: “We have been doing sustainable design for a long time.” Perhaps the term “long time” is the key and could be looked at a little closer. More than 10 years may not be considered a long time in most industries, but the growing world of sustainability has surpassed a decade of evaluation.

According to the U.S. Green Building Council’s (USGBC) records at the end of 2004, there were eight projects in California that had achieved a LEED rating from the organization. Of those eight projects, two were design by LPA: Premier Automotive Group’s headquarters in Irvine, California—the first LEED NC certified project in the country—and Toyota South Campus in Torrance, California.

It can then be determined that there were seven firms in California who can state they have a LEED project more than 10 years old— at least since it has been measurable with USGBC's LEED criteria.

Two recent design awards received by LPA might be helpful in understanding the difference between stating “a long time” and having a strong belief that made sustainability a significant part of our firm’s culture.

At the American Institute of Architects, Orange County (AIAOC) Design Awards program on Sept. 17, the Irvine Ranch Water District (IRWD) Headquarters received the 25-Year Award. As one of the highest honors to be given by the AIAOC, this award is a special tribute given to projects that have withstood the test of time. Additionally, at the AIA Pasadena and Foothill (AIAPF) chapter Design Awards program on Sept. 24, Cal Poly Pomona's Bronco Recreation and Intramural Complex (BRIC) received the only Sustainability Award given in the entire program.

While these two projects differ greatly in program, size and are separated by more than 25 years, they share LPA’s long-standing, fundamental belief that a process focused on sustainability looks to solve problems and not chase fashion. This concept is the key in creating spaces with the intention to enhance the built environment for years to come.

The early sketches of the IRWD facility show how an understanding of the sun path direction and how the building should respond to its orientation could be used to not only create an energy-efficient building, but would create a timeless response to its environment. The AIAOC praised IRWD for its forward-looking design long before LEED or sustainability became the new normal in the industry that it is now. The project exceeded Title-24 standards by a remarkable 50 percent in 1990 and sustainable features like drought-tolerant planting; exterior shading elements; proper solar orientation; occupancy sensors; day lighting controls; thermal energy storage (off-set peak energy use); 100 percent economizer and a high efficiency chilled water system that could be part of a sustainable discussion even today. 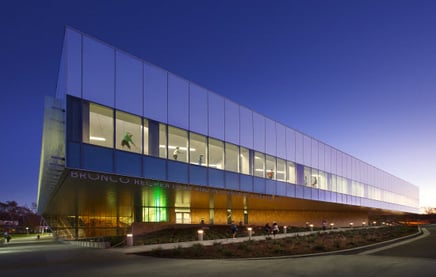 Cal Poly Pomona’s BRIC responded to its campus environment while using program and site constraints to create a building that demonstrates its sustainable story. The design team took advantage of a difficult site by using larger program elements as overhangs to shade portions of the building while a natural ventilated lobby creates an inventive way to open the building to the campus users. The BRIC also includes sustainable design elements like high-performance stormwater management systems, solar water-heating system for the pool and a drought tolerant landscape maintained with greywater. The facility is registered and on track to receive LEED Gold certification this fall.

Why are design awards important? It’s simple. Anything that raises the level of discourse or promotes excellence in design is a significant honor to our teams and firm. These two projects may not seem to have much in common, but there is one very clear common element: sustainability. That is why we created a new model of practice more than eight years ago with the belief that sustainability is much too important to be treated as a scorecard or solved by a team cobbled together for a specific project. These two awards make us more committed than ever to our integrated design practice that enables our teams to maximize performance, collaboration and engagement.

Dan Heinfeld, FAIA, LEED AP BD+C and President of LPA Inc., leads the design direction of the firm and has done so for more than 30 years. As a pioneer in the sustainable building movement Heinfeld is passionate about sustainability and its importance in the process of informed design. More than 600 major design awards attest to the firms's commitment to design excellence. LPA provides services in architecture, sustainability, planning, interior design, landscape architecture, engineering and graphics.