The Structure of a Student Center Uncovered 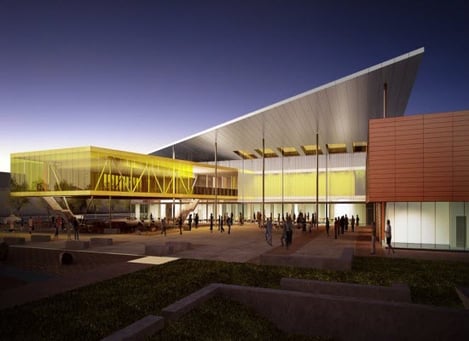 Los Angeles Valley College (LAVC) is a two-year public college located in Los Angeles’ San Fernando Valley. The campus is currently undergoing a $626 million expansion and renovation project funded by bonds supported by the citizens of Los Angeles. It's comprised of renovations and improvements to an existing building along with the construction of several new building facilities to better serve the faculty and student body.

A focal point of the campus expansion is the 66,118-square-foot Monarch Center Student Union, which was designed and constructed in a design-build partnership between McCarthy Building Companies and LPA. The two-story student union includes a cafeteria, dining room, health center, business center, bookstore, coffee bar, board room and study hall along with the associated landscaping. 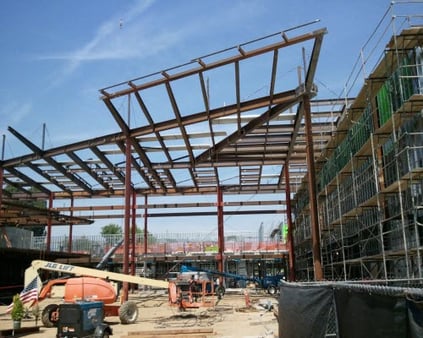 I recently had the pleasure of accompanying lead architect James Raver, AIA, and lead structural engineer Daniel Wang, SE, on a visit to the student union. We visited the site during a period of construction that showcased the structural engineering involved in bringing life to the building’s most unique design features.

The most prominent design feature was immediately apparent as we entered the site. The 20,000-square-foot sloping front entrance canopy towers 41 feet above finished grade at its highest point. Beyond its aesthetic beauty, the canopy serves to shade the courtyard area centered within the student union while simultaneously providing an open feel to the area. The structural framing of the canopy was designed and optimized such that only five 16-inch diameter pipe columns occupy the nearly 9,000 square feet of exterior courtyard. The canopy is also unique in that it is designed to transfer all seismic or wind-induced loading into the lateral force resisting system of the main structure, rather than relying on the canopy columns to aid in resistance through cantilever action. This allowed the cantilever columns to be much smaller in both size and quantity and ultimately less intrusive to the open environment of the courtyard. 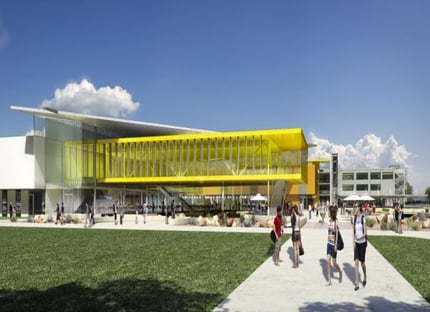 The unique truss system between the second floor and roof along the west end of the student union preserves the open environment within the courtyard. This perimeter truss system allows the west end of the student union to be supported by only a single column at each end of two 100-foot long trusses. What is even more impressive is that this truss system was formed with only six diagonal gravity braces along each of the 100 foot trusses, allowing the second floor open office and study hall areas to maintain the same open feel as the rest of the building.

Another distinct structural feature of the student union is the design of its exterior façade. Through the use of an efficient header and jamb system, the exterior metal stud framing is capable of achieving parapet heights up to 14 feet above the roof level without the use of diagonal braces resulting in a lot more usable roof space for the student union.

One of the most exciting things about practicing structural engineering at LPA is the opportunity to contribute to visionary building designs like the LAVC Monarch Center Student Union Building and be a part of an integrated design practice. Building forms that break from the conventional box shape are not only inspiring to our design team but will ultimately inspire future generations of students.