Out with the Old, In with the New 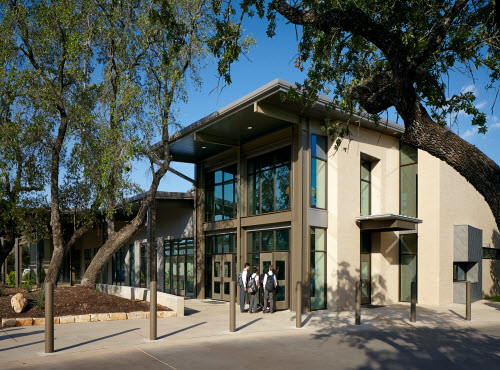 San Antonio Christian Schools (SACS), the first Protestant School in San Antonio to be fully accredited by the Association of Christian Schools International, serves more than 1,150 K-12 students. In 1998, Mark Oppelt, AIA, LEED AP, designed the original 40-acre campus, which was designed for 700 students on the Redland Road campus. The school purchased an adjacent property, which housed a 12,000-square-foot metal warehouse building, from its previous owners in 2007. For years, it remained unaltered and seldom used.

In 2014, project coordinator and alumnus of SACS, Jim Oppelt, began working with the school administration to renovate the warehouse into a 19,200-square-foot multi-use facility that functions as a cafeteria, chapel and community events space. The new Student Life Center is a space that is accessible, functional and flexible. 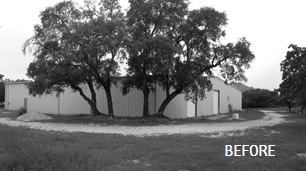 The team applied a sustainable design approach to the design of the center and prioritized three objectives in renovating the existing building:

To improve the ease of accessibility

One of the main objectives was to better connect the center to the main campus. With acres of overgrown landscape, the warehouse lacked visibility to the rest of the campus and needed improved pedestrian pathways. Additionally, with an inefficient drop-off/pick-up system, the building was difficult to access by car or foot. As a solution, underbrush was cleared, additional connections were carved through the site’s native oak trees and the east side of the center was opened with glazing to provide a strong visual connection between the main campus and the center. The building’s main pedestrian entrance faces the main campus, distinguished by two large oak trees. An overdue reconfiguration of site traffic relocated student drop-off and pick-up for the higher-level schools at the front door of the center. By increasing the connection to the new part of campus, the design provides a more cohesive K-12 school campus layout. 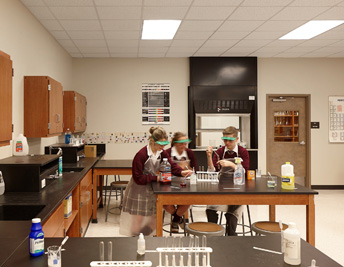 The original campus was becoming increasingly impacted as enrollment increased. With a priority of providing more space for hands-on STEM education, the school wanted to upgrade the science curriculum and add science labs for middle- and high school-age students. As a solution, the renovated building became a cafeteria space, freeing up the original cafeteria to transform into science labs. Improvements were simultaneously made to the school’s food service system. The original cafeteria lacked a commercial kitchen and a space for lunch sales. By renovating the center, the school gained a commercial kitchen, more efficient space for two busy lunch periods, and an opportunity for lunch sales. Additionally, students now benefit by having five science labs to learn in, instead of one. This, along with improved science curriculum and better access to labs, has resulted in improved learning and social environments for students.

To create a multi-functional space

The school wanted the center to be used not only by the students, but by its extended community. The design team set out to make a more flexible, user-friendly space that can be used by a variety of community groups. It was no easy task renovating a 25-year-old, pre-engineered metal building with no drawings of the previously completed project. Collaboration with a metal building subcontractor and an HVAC contractor early in the design led to an estimated $200,000 in savings. The new space offers an indoor/outdoor ticket booth, commercial kitchen space, generous dining porch and a connecting plaza woven into the east side of the building, with functional outdoor gathering space. The school is now able to increase the gatherings of their chapel from a 300- to a 700-person capacity and dining capacity from a 250- to 500-person space. From athletic groups’ weekly practices, to events for all high school students and families and a volunteer-driven annual student banquet, the community is making great use of the center.

Alan Axtell, former Superintendent of Schools at SACS, expressed, “We couldn’t have been happier with LPA. They were thorough, professional and competent in every way. They will always be our architects.”