The evolving identity of public libraries and their impact on a community.

Public libraries have transformed from dark rows of shelved books to inviting community centers with an array of digital resources. The modern library is keeping up with a fast-changing world, where endless streams of information are instantly available.

The challenge is to create a new type of library that is relevant and useful as communities evolve. Libraries are finding new ways to engage their constituencies, providing healthy environments, collaboration spots and community resources, in addition to access to books. Thoughtful design is helping facilities explore different pathways to knowledge, public interactions and inspiration that can’t be found anywhere else in the physical or digital world.

Even in an age when information is available at our fingertips, libraries can play a key role. “Libraries are where people still look eye-to-eye, communicate face-to-face and learn social skills while they’re working together,” says Jim Wirick, principal at LPA. “You can’t get that on Facebook.” 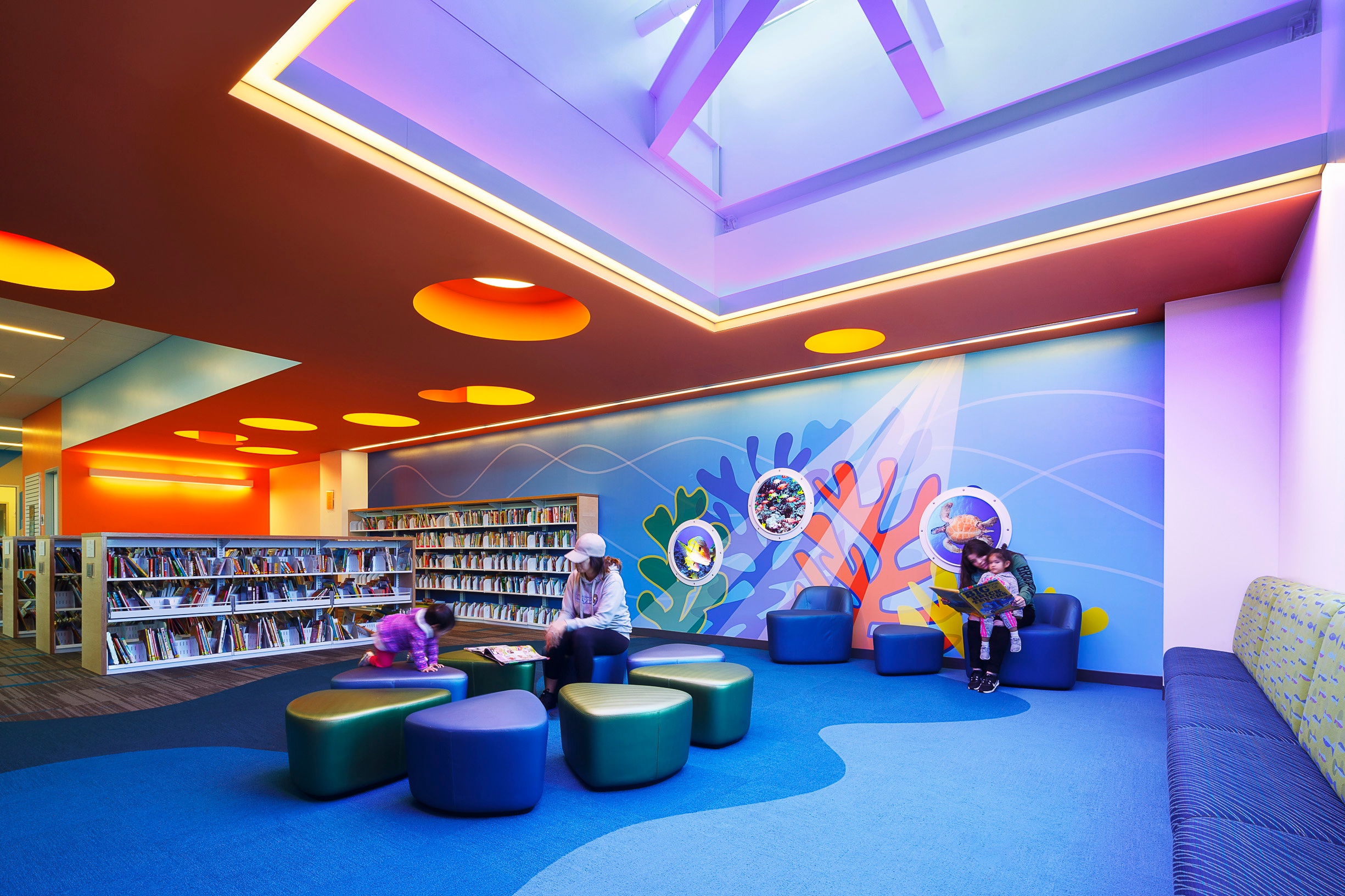 Addressing the Needs of the Community

Sixty-five percent of Americans say public libraries help them grow as people, according to a Pew Research Center survey. Communities can leverage and develop this demographic by providing a dynamic public space for visitors to learn, engage and grow.

“Libraries are still all about knowledge,” says Rick D’Amato, principal at LPA. “But now they are evolving into lifelong learning centers.”

When developing a new library, or renovating an old one, diving into the demographics of the region is an important first step to deciding what type of resources and technologies will best serve the community. “Libraries need to be about filling in the gaps,” D’Amato says. “What don’t these people have at home that they need the library to fulfill?”

There are distinct differences in the goals for a library in underprivileged and affluent neighborhoods. For Schaefer Branch Library in San Antonio, surveys showed that only 25 percent of the local households had computers, which changed the strategy, says Mickey Conrad, principal at LPA. Rows of a public computing labs with free Wi-Fi were included in the library design, as well as teleconferencing capabilities and a teen space with video game accessibility.

“What’s going to work for your library depends on the demands and the market analysis of the area around the city,” Wirick says.

In wealthier communities such as Malibu and Mission Viejo in California, the issue wasn’t resources, but rather a lack of community space, D’Amato says. To address this demand, lounge areas and large multipurpose rooms were included for civic activities and citizen engagement.

The new 30,000-square-foot, two-story Patrick Heath Public Library in Boerne, Texas, is part of a master planned civic center complex, which acts as a center for cultural activities. “They’ll have poets come in. They’ll have folk singers,” Conrad says. In the first year after the library opened, the number of visitors rose by 30 percent and event attendance increased by 42 percent, according to the library’s data.

More Than a Study Spot

This translates to incorporating informal spaces within a library where both random and intentional in-person relationships are made. For example, the 25,000-square-foot Michelle Obama Branch Library in Long Beach, California creates a group-oriented dynamic with a variety of community and meeting room spaces. Restaurant-style, high-backed booths line up against windowed walls, allowing people to work together in a setting much different than a traditional library. The library also includes three public meeting rooms and a makerspace. A maker space allows individuals or groups to work together on specific projects which typically involve hands-on activities, technology or research. This space is a flexible environment that provides a platform for a wide range of collaboration and thought as well as an ability to adapt to new systems and processes.

The library is playing a different role in people’s lives and careers, including resources for people looking for jobs, such as printing capabilities and access to sites to help build resume and apply for jobs.

The design for the Schaefer Branch included teleconference capabilities for job interviews and meetings on platforms such as Skype or GoToMeeting. The library’s collaboration zones also serve as a place to network and meet with potential employers.

The modern library can play an important role in to promoting different groups and interests, encouraging people to get involved with their community. Art installations, intimate concerts, outdoor gardening—libraries can offer a variety of ways to promote engagement. “It’s become much more than just books on a shelf,” says D’Amato. “It’s a whole range of things that don’t typically appear in a community that are now available.”

A Space for All Ages

New designs include customizable spaces for children and teens, providing personalized destinations within a library. The children’s activity space at Schaefer Branch Library is enclosed with sloping, translucent plastic panels where a child can enter and use their imagination. The separate teen space is an enclosed area in the front of the library, ensuring the main reading room will not be disrupted by teenagers socializing and play videogames.

“Libraries empower the youth and seniors of the community especially,” D’Amato says. “How those spaces integrate with the community needs is what’s changing and evolving libraries.”

Research shows that millennials—arguably the first generation to grow up online—use public libraries more than older adults. According to the Pew Research Center survey, 53 percent of respondents ages 18 to 35 visited a public library or bookmobile within the previous year. To address this growing group of library goers, design should be all about flexibility. Libraries are now incorporating the outdoors for biophilia, creating zones for a variety of experiences and embracing technology. At Patrick Heath Library, shelves were placed on casters, so they can move around leaving an open space for programs or events. 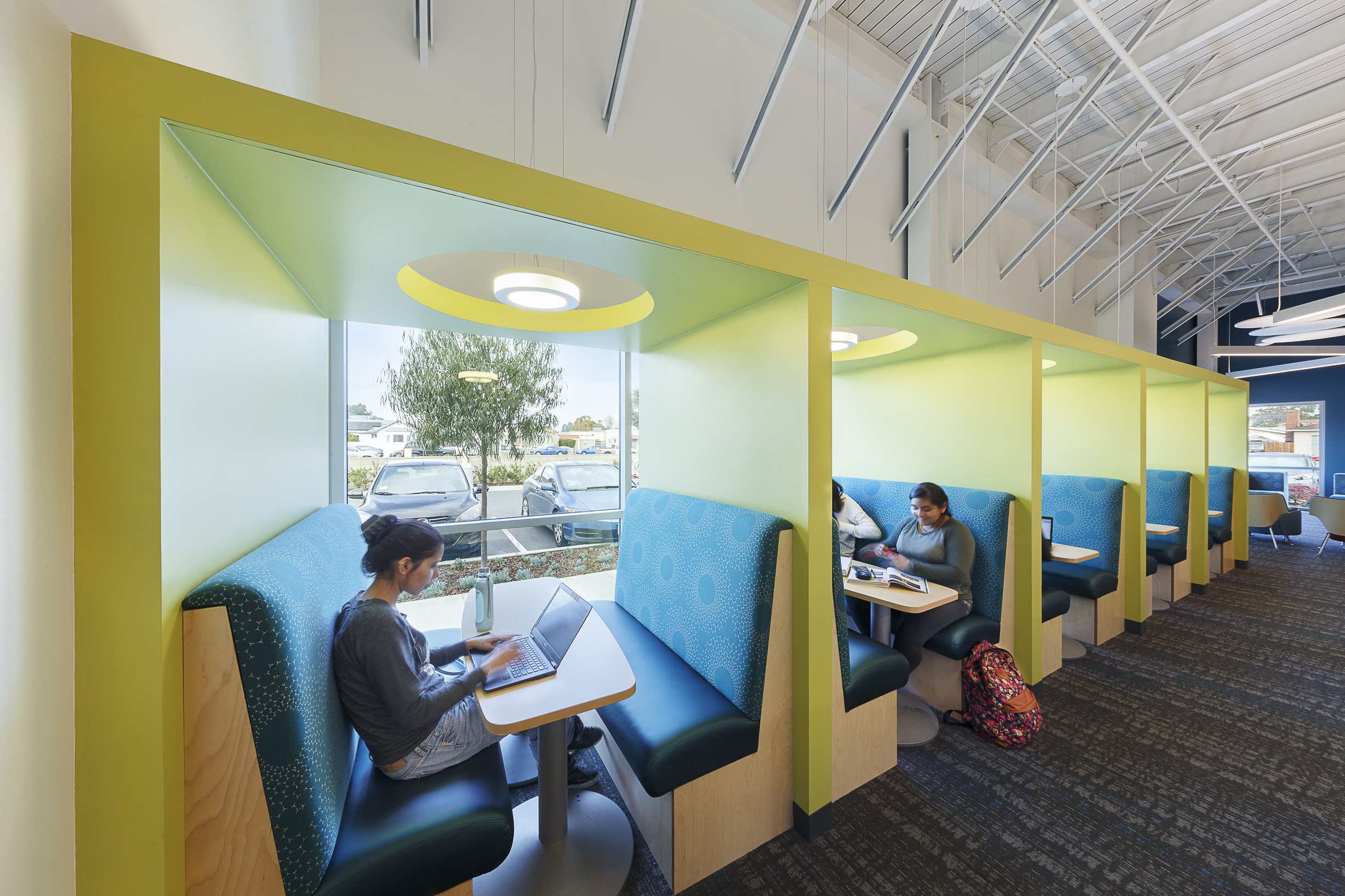 Created as a Teaching Tool

For many libraries, the building itself can be used as a teaching tool for visitors. A sustainable design can save money and serve as a model for the community. “There’s always some sort of educational component when we design a sustainable library that teaches the community,” D’Amato says.

Michelle Obama Library was designed to embrace sustainability with efficient water use systems, drought-tolerant landscape palette and natural daylight on display. There’s a connection to the environmental nature of the library and using it as an educational tool which is adjunct to civic policy.

“If a city has a strong sustainable attitude, it’s going to manifest itself in a library first and foremost because that’s the city’s connection to the public,” says D’Amato. “Not everybody in a community goes to a city hall or goes to a fire station. You’re going to have your best shot at reaching your community in a library as a community center.”

Libraries can often facilitate progress within a community. The Patrick Heath Public Library is the first LEED certified project in Kendall County, Texas. There are two large outdoor water harvesting cisterns in the facility, which is “a really iconic element in Texas,” and allowed visitors to learn water-saving strategies, Conrad says.

Newly-designed libraries also serve as the spot where technology is explored and embraced. Devices like 3-D printers and virtual reality gaming are integrated into designs.

A world where a library doesn’t provide books is still a novelty at this point, D’Amato says. “There always needs to be that connection to the written word on a page.” Libraries will continue to provide books, along with cutting-edge technologies, spaces for interaction and cultural influences.

But books won’t be enough. For communities to maximize the value of their public libraries, they must provide the essential elements needed for members, D’Amato says. “Libraries are a catalyst for community,” he says. “You’re going to leave a library a better person than you were walking into one.”