Case Study: Inspired by the Arts

Creating a theater that celebrates the art of theater production.

The East Central High School’s Performing Arts Center in San Antonio goes beyond the bones of any normal performing arts center, creating a unique facility where people can view the creative process in action. All the production rooms in the 37,500 square-foot building—from costume design to scene creation—are arranged in a circle with broad windows, allowing the center to function as a teaching tool for both the students and the community.

Over a 15-year relationship, LPA has completed several projects for the East Central Independent School District (ECISD) and that association and trust helped develop the Performing Arts Center. The process focused the design on the district’s larger goals, resulting in a building that saves money and creates dynamic spaces to practice and perform.

The performing arts center, which is scheduled for completion in 2018, includes a 1,000-seat auditorium with lobby and stage; 6,800 square feet of theater program space with dressing rooms, costume/scene shop, full-scale rehearsal room; 3,250 square feet of choir space for an ensemble; a sound/recording room; office space, as well as support areas such as concessions, restrooms and box office. Though the performing arts center will be located on the school’s campus, it will be used by the entire district, and it is important that the building is recognized as a community resource.

The design is inspired by the process of a theatrical performance production. At the project inception, the design team performed extensive research on the development of a production—from script writing and rehearsals to stage construction and performances. The performing arts center is a literal reflection of the theatrical process timeline, with the circle of rooms displaying each step in the process. Tall windows surround the different spaces inside the center, allowing visitors to view the behind-the-scenes activity, creating a direct connection into each phase of theater production.

Site analysis was performed by the design team to understand how the building would be impacted by visitor traffic flow and the climate. Given its location on the campus, the building is expected to have heavy circulation around all sides, creating the need for the building to offer an inviting exterior from each direction. 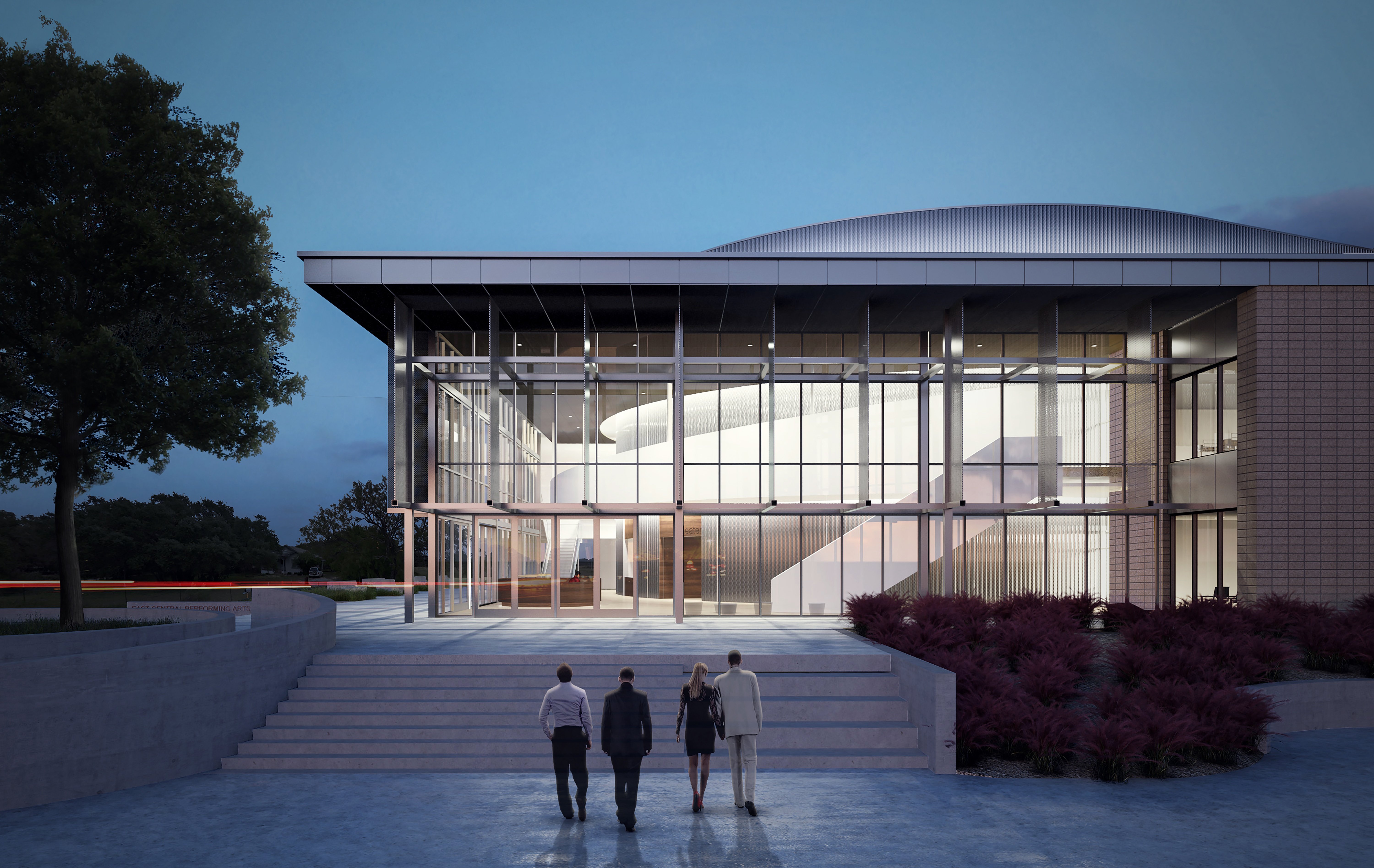 Different Ways to Save Money

Solar analysis was used to determine the appropriate location, spacing and depth of east- and west-facing vertical fins and roof overhangs, which were used to mitigate the harsh South Texas sun. The emphasis on daylight in key areas such as the lobby and rehearsal room provide long-term energy cost savings, lowering the lighting load on the building.

The careful organization of spaces around a single corridor produced a building that was nine percent more efficient than the projected square footage. This reduction allowed financial resources to be reallocated to the auditorium’s performance spaces, where top-of-the-line acoustics and building technology are essential. Extensive acoustics research was necessary to shape the auditorium’s interior, developing the appropriate sound diffusions and dispersion. Accordion walls along the interior vary to reflect the acoustical demands. The design team also used structurally-interrupted storefront instead of curtain wall to manage the cost of the full-height glass used throughout the space.

The overall effect is a building that celebrates the dynamic art of theater production, a showcase that will produce daily benefits for both the administration and students.