Aquatic centers are notorious energy hogs. Buildings can be designed to cut consumption and operate more efficiently, but the pools always make it difficult to achieve substantial savings. There is simply no way to get around heating a ton of water and keeping it heated for long hours.

The LPA Sport + Recreation team recently gathered for a charrette focused on the complexities of designing an energy efficient aquatic center and to explore future possibilities. The team was joined by Dennis Berkshire, President of Aquatic Design Group, one of the leading pool designers in the country and a frequent LPA collaborator. 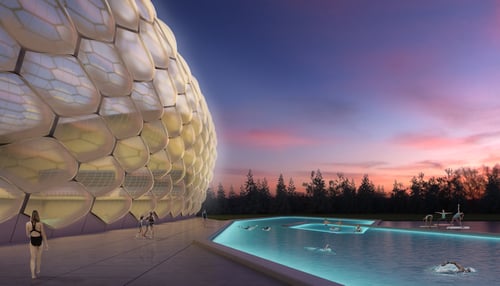 “There were a lot of experts in the room,” says Jeff Schaub, Senior Project Designer for LPA. “Sitting back and listening to the different perspectives was an enlightening experience.”

Everyone involved with aquatic centers understands the issues. On every level, pools are an inefficient but vital component to community’s health, fitness and recreation. On average, about 15 percent of communities participate in aquatic programming, according to the National Sporting Goods Association. But maintaining pools require a tremendous amount of (expensive) energy. The water is heated, only to evaporate or be flushed and filtered to maintain the chemical balance. The embodied energy is lost. The water is almost always heated by gas-fueled boilers, a major obstacle when trying to address the use of fossil fuels.

The designers agreed that cutting usage and saving a few dollars was not enough help for operators. The real goal is to design a net-zero aquatic center, which is something of a Holy Grail for green-focused designers. To hit that bar, pools will have to operate differently.

“If you want to get to net zero, you have to get rid of gas,” Berkshire says.

The obvious and first thought is photovoltaic (PV) panels.  But this one feature alone is not enough, the designers agreed. They may generate energy, but PV panels don’t address the big picture issues of heating the pools. Solar thermal panels are often a better or more effective answer, but the problem is storing the heated water generated by the solar thermal, so it can be used when it is most needed, Berkshire says. Different technologies are in development that may solve this issue—such as installing a geo-thermal field that will allow the heated water to be stored in the ground underneath the facility—but the technology is not ready for deployment, he says.

The team confirmed that there is no silver bullet. The solution was incorporating a series of strategies and innovative design forms and materials collectively, working towards the goal.

The designers focused the dialogue on what is reasonable and achievable, not science fiction. Only technologies that could reasonably pay for themselves in a short-term window were considered. The idea was to design a pool that could be built now, not 20 years from now.

It soon became clear that relying on widely-adapted techniques wouldn’t get a facility closer to net zero. The group started examining how emerging technologies could be merged and adapted into an efficient facility.

After much discussion, a design started to emerge. The key element: a parametrically-designed dome using inflatable panels made of ETFE, a plastic polymer, which would cover a 50-meter competition pool. PV panels and solar panels would be infused into the hybrid ETFE panels to generate energy, tied directly to the pool system.

ETFE was famously used for the Beijing National Aquatics Center, known as the Cube, built for the 2008 Olympics. The panels are one percent the weight of glass and allow light to penetrate without the heat. ETFE is also structurally stable and the internal layer can be inflated to provide more shading to help maintain a consistent environment around the pool. The dome allows the pool to maintain and reclaim heat coming off the water, without developing a humid, spa-like atmosphere.

The building was also oriented and elongated on an east-west axis to collect the maximum amount of solar energy. A green roof covers a two-story building designed to house administration offices and support facilities.

Other elements of the design began to emerge, as the group focused on creating a well-rounded facility. Four geometric-shaped splash pools and reflecting ponds echo the patterns of the ETFE enclosure and create fun, active community spaces. Solar thermal and an efficient pool cover system would help cut energy use. A leisure pool would be adjacent to the building to link to different programming activities.

“Rather than separate compounds, we’re trying to weave together the different elements,” Schaub says.

The final design that emerged from the discussions is an example of what can be achieved through collaborative design and a focus on incorporating energy-producing technologies. The design may not achieve true net zero, but it could be realized in the next 10 to 15 years, as new technologies emerge, the designers agreed.

“The conversation was really good,” Izadi says. “It was all about the challenges.”