LEDs: Lighting the Road to a Greener Future 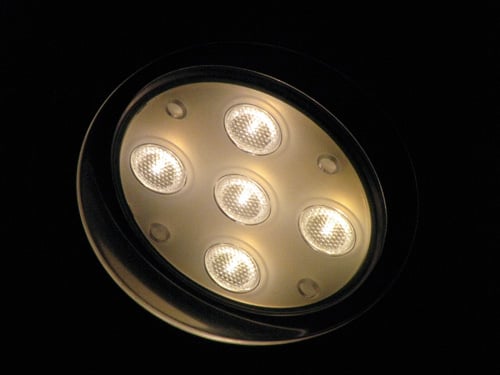 Has anyone noticed anything different at night while driving along the freeway? I have. In select locations, Caltrans has replaced the traditional, hideously orange sodium vapor lamps with subtly warm, white LED's (light emitting diodes), yielding clean, bright illumination on the nighttime roadways. I've found this refreshing, because I've never liked the garishly orange or yellow color rendition of the sodium lamps. And as a photographer, I've always found overly warm lighting to be frustrating to deal with, or at least be a complication on my picture shooting.

But there's more to implementing LED's in freeway lighting than simple aesthetics. Long term energy use and maintenance issues come into play, as well. According to Caltrans, 40,000 new LED lamps being installed over a two year period will use 60 percent less energy and save the state $2 million in annual energy costs. The longer shelf life will also reduce the number of times maintenance workers need to service these light fixtures, increasing safety. Also contributing to a safer environment is the increased brightness and reduced glare of LED fixtures, allowing for better and more even illumination on the road surface, making nighttime driving a little less perilous. 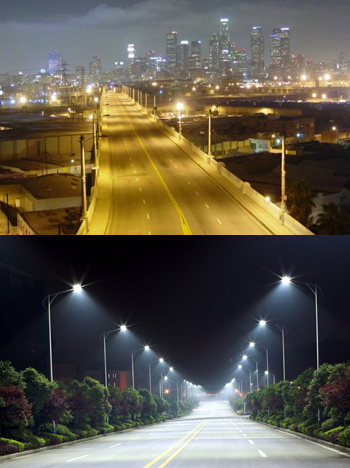 It's fascinating to see how far LED's have come over the past few years. When I was in college (just under six years ago), LED's were still spoken of as luxury items, still mostly in the development phase when it came to commercial use, and much too expensive to be viable design options. There were still legitimate concerns about how accurately they could reproduce color—particularly whites, which tended to be overly cool and clinical-looking. Since then, we've seen LED lighting proliferate the market, LED televisions and screens become an affordable norm, and portable electronics all switch over to LED's as their primary display. LED's now produce rich, dynamic colors all across the spectrum, and white light truly appears white, rather than tinted.

It's a great trend, of course. Less energy use is always beneficial in this increasingly sustainability-minded society, and the reduced costs of maintenance present a very strong argument toward this greener move. LED light fixtures also do not contain mercury, which gives them an environmental advantage over similarly efficient fluorescent bulbs. Being of solid state components makes them less easily damaged by abuse, and LED failure typically occurs in the form of gradual dimming, rather than sudden outage.

On the flip side, the upfront cost of LED's can be starkly greater than traditional lamps, which may present a shock to those not used to the numbers. LED street lights, for example, can be twice the cost of traditional types. The deal, of course, comes in the promise of greater longevity and significantly reduced lifetime costs. Care must also be taken to ensure that the environment in which LED lamps are placed does not grow too hot. LED's also use different mounting sockets than traditional bulbs, so simply converting lamp types is not necessarily straightforward. But as technology has advanced, and the market has accepted more and more LED lighting, these cons have become less obtrusive obstacles.

Ultimately, sustainability is about investing in elements that maximize long term effectiveness. And often times, which will involve an initial premium.  As many designers, clients, and users are discovering, that premium is usually worth the investment.  And if everyone can buy into that mentality, then the future will most assuredly look a little brighter.