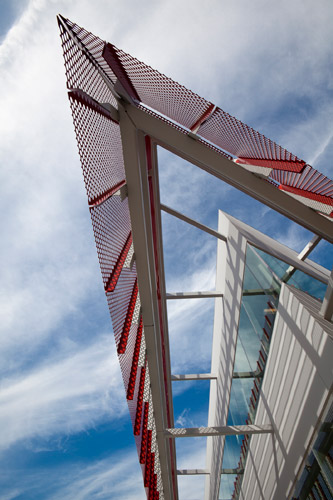 While Recreation and Wellness centers seem like a mainstay on college campuses, it wasn’t too long ago that they were not. If you think back, the higher education experience has often been categorized into, and known for its, academics and athletics. You had the really smart students and then you had the students that were on their way to the NBA or the NFL, or to play professional baseball. What the Recreation Center has done, is fill-in the gap. It’s a place for students of all levels of academic and athletic abilities. It is the social place for student life on campus to not only participate in physical activity but to “see and be seen” by other students.

The Recreation and Wellness Center (RAW) at California State University East Bay in Hayward, California, is such an example. Recently featured in Environmental Design and Construction, its popularity rivals that of the campus library, and it’s become a huge recruiting tool because of its proximity to student housing.

Featuring a two-court gymnasium, a fitness center, multipurpose rooms and support areas, CSU East Bay’s Recreation and Wellness Center is a place for students to exercise, socialize, and burn off steam in between classes.

The site itself is very interesting. Set in Northern California, we were aware of the area’s prospects for earthquakes and resulting structural challenges. At the same time, we found great gifts in the region’s climate. The sloping site is located in Hayward, CA a mere 50 minutes south of San Francisco. The hillside site is part of the geological landform that defines the Bay Area. As a result, the site offers stunning panoramic views, which already started to dictate a level of transparency.

Typically, there is this concern that windows, and transparency, are a bad thing, because students will look outside and lose focus. Well, the opposite is true in a Recreation and Wellness Center. Students go there to exercise, socialize, and enjoy views of their surroundings. The Recreation Center at CSU East Bay gives students that transparency and a connection a connection to nature, while protecting them from the temperature swings of the outdoors. 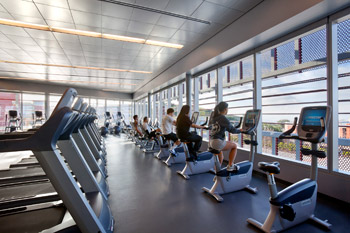 From a mechanical engineering perspective, the climate challenges presented by the bay are intriguing. We found that heating was needed, over cooling. The design of the Center had to allow the building to capture heat during the day, and release it at night. Especially because the facility is in use by students at all hours of the day.

We came up with an idea inspired by the water-filled trombe walls of the 1960s.

Columns of Plexiglass tubes used to be filled with water, and placed on south-facing sides of buildings. They’d head up during the day and when the sun went down, and the temperature started dropping, the tubes of warm water would act as radiators – they’d release heat. It’s called the Flywheel effect. 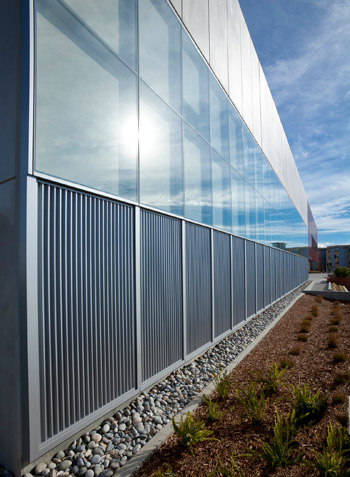 We paired this idea of gaining and releasing heat with tilt-up concrete, the most cost effective construction technology, and designed something which has never been done before—a Ventilated Tilt-up Trombe Wall. It’s a southwest-facing wall, where light comes through glass and hits concrete, where it bounces around inside of the chamber, and hyper-heats concrete. At night, the heat released from the nine-inch thick wall warms the great volume of the CSU East Bay gymnasium.

A concrete wall warms naturally; we simply enhanced the process by placing glass in front of it. Our in-house engineers ran the calculations and it worked.

The University is excited because the Ventilated Trombe Wall is one of the reasons the Wellness and Recreation Center runs without an active heating system. And we, of course, are excited to have a new feature added to our arsenal of time-tested and proven sustainable design techniques.

In Part 2 of this series, we’ll talk about this Rec Center’s love affair and connection with nature, cost-effective and award winning construction materials, and the active role it plays in the University’s mission of sustainability.

Glenn Carels is a Design Principal at California-based LPA Inc. As the California State University system moves toward greener campuses, Carels has played a critical role in the implementation of their sustainability guidelines and initiatives. During his 25-year career, he’s garnered 37 AIA awards for his sustainable design work.