The Benefits of a Sustainability-Minded, Integrated Team

Design Build. Lease-Leaseback. Integrated Project Delivery (or IPD). These are terms increasingly seen in the sustainability-minded, efficiency-oriented world of design, engineering, and construction. The basis of these methodologies is essentially the same: to include parties that traditionally enter later during the design proc 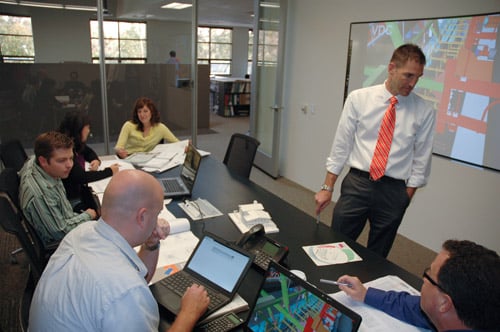 ess—such as the engineers and contractors—earlier, so that they can offer their expertise from the start, resulting in an integrated design that allows for a smoother construction process and a better performing building.

There are many benefits to this type of approach. Having engineers involved early in the design process allows them to understand the design concepts and intent, and craft structural and mechanical systems to work in synergy with and reinforce that intent. Partnering together earlier ideally solves many of the systems conflicts and lack of space issues that commonly arise in a traditional design process. Having a contractor or construction manager allows the same important ideas to be communicated to the actual construction side. When a builder understands a design more intimately before complete documentation, he can provide a more accurate estimation of the budget and feasibility of a project, ideally smoothing the wrinkles that can arise during actual construction.

But having an integrated project team presents its fair share of challenges. Designs often need to be flushed out earlier than during a traditional process, to give engineers and consulting designers workable products to analyze and design around. It may be counterproductive to revise designs over and over again—a common designer trait, as we all know—in order to manifest the ideal solution. The pressure to “get it right” the first time is certainly high. There’s always the worry that an early technical collaboration can stifle or deter the creative energies that are so vital to a wholesome, effective design, because focusing on the details can come earlier.

Not surprisingly, then, it’s important to manage everyone’s expectations and issues when working together on an IPD platform. Communicating common goals and intents is key. Conveying expectations to all team members streamlines management. Planning ahead to establish clear deliverables provides a roadmap that the team can follow, to 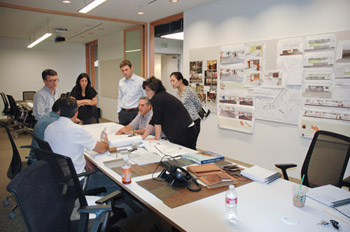 avoid confusion. There will most certainly be hurdles and disagreements among the members, but these can be overcome.

Even problems that arise, which traditional teams might typically put off solving until later, can become opportunities. Technical conflicts can be taken as a challenge to holistically collaborate to produce an even better solution. Earlier attention to detail can identify code and constructability issues that might prove much more troublesome or harmful to the design if it was left to be corrected in a later phase. Utilizing the resources and knowledge of a builder can lead to better detailing and construction, born of holistic collaboration.

Ultimately IPD strives to be a better and more efficient process. And this almost certainly assures that it will be a more difficult process as well. But the stake is improved efficiency, execution, and profitability in return, and a successful team that accomplishes this will reap much greater benefits than a traditional design process team. Doesn’t this agree with a more sustainable manner of design? It’s a good reason why such an arrangement figures to become the norm in the years to come.