In the High Desert of San Bernardino County, are two fairly new government facilities that have been generating lots of buzz. Both designed by the architects, engineers, interior designers, and landscape architects of LPA, the Hesperia Police Department and Jerry Lewis High Desert San Bernardino County Government Center feature impressive solar photovoltaic arrays, which generate almost 473,000 kilowatt-hours per year. To get a more in-depth understanding of what these projects mean for future design and construction in the civic architecture realm, we decided to interview one of the project team members, architect Jeremy Hart. 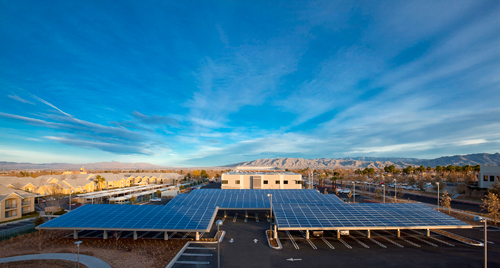 Q. How have these projects stood out, among the many others you’ve worked on during your career?

A. The High Desert Government Center and the Hesperia Police Department have been unique opportunities in my career. In 2002, I began working on a public library and a city hall for the City of Hesperia. This constituted the first phase of their Civic Center Master Plan. Five years later, LPA and Griffin Structures were asked back by the city to help them develop the next phase of the Civic Center. It was a rare and unique opportunity to have the chance to advance the design vision that we began in phase one. In the first phase, we focused primarily on honing in on a design aesthetic that was contextual and unique to the city. With a lot of those questions resolved by phase two, we were able to work toward designing buildings that were extremely water and energy efficient.

Q. Is it common for government projects to exhibit this kind of energy efficiency? What does this mean for future county and city commissioned projects?

More and more cities and counties are requiring facilities that are energy efficient, and the driving factors are hard to argue with. As budgets for state, county, and city governments shrink, the price of energy only continues to increase. Real, monetary savings can be had for users through efficiently designed buildings.

Q. How will the design of these buildings provide tangible benefits to the community? Users of the building? Law enforcement? Elected officials? 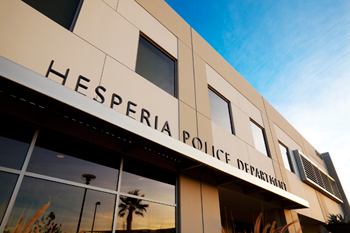 The buildings are impactful in the community on many levels. They provide a model for energy efficient design in the high desert and make the first step toward understanding what it takes to design a net zero building. There are energy monitor displays that give real time and historical data on energy production, from the photovoltaic panels and the energy consumption of the building and its occupants. These give feedback to the users and help them understand how they can occupy their buildings more efficiently. Additionally, monies saved on energy bills can be spent elsewhere in the community giving elected officials more resources to serve constituents.

Q. Anything else you’d like to share about the Hesperia Police Department or High Desert Government Center?

A. While funding for the large photovoltaic arrays in the parking lots and on the roof of the Police Department and the Government Center was subsidized by ARRA Energy Efficiency Block Grants and the California Solar Initiative, the city had been looking at ways to incorporate renewable energy into the design before all of the funding sources were available. As technology progresses and solar panels become less expensive and more energy efficient, I think we will see many more users implementing renewable energy options into the design of their projects. This is only the beginning.