Beneath the terraced seating, ducts carry conditioned air and deliver it into the auditorium via air grilles located beneath the seats. This strategy of delivering air at the floor level with return air openings in the ceiling, called "thermal displacement ventilation," provides a number of benefits.

Since the air arrives at the level of the occupants it is distributed at a lower velocity and at a warmer temperature than a conventional system which supplies colder air at the level of the ceiling and then forces it down to the occupied zone. The lower pressure, warmer supply air reduces the cooling load and fan energy requirements resulting in an HVAC system that is more energy efficient.

As the conditioned air enters at the floor level it is heated by equipment, lighting and people causing it to rise naturally and displace the air in the room (thermal displacement). As the warmer room air rises to the ceiling it is collected by return air grilles. The resulting air flow carries heat and contaminants away from the occupants with much less air mixing than conventional ceiling based systems, improving the overall indoor air quality. 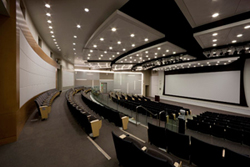 JPL, which will use the auditorium for media events, symposiums, and large project team design meetings, will also benefit from a mechanical system that operates at a quieter level than its conventional counterparts. The floor system that separates the ductwork from the auditorium creates a more significant acoustical barrier than the standard lay-in acoustical ceiling that is found in most office buildings. More importantly the low velocity of the distributed air in a displacement ventilation system creates less noise disruption as it travels through the ducts and into the space. 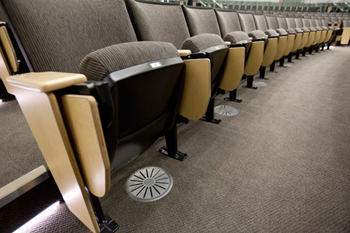 A number of energy efficient strategies have been implemented at the Flight Projects Center including high efficiency chillers and boilers, a high performance building envelope, and natural daylighting teamed with daylighting controls. These technologies are a part of a design solution that exceeds California's energy codes (Title 24) by 25 percent. The auditorium's displacement ventilation system will contribute to the energy savings that will be realized by the project and will also provide JPL with improved interior air quality and a higher level of acoustical performance.