Imagine my intrigue when I stumbled upon an article on ArchRecord.com that speculates upon the death of suburban sprawl, which, accelerated by the current economic recession, will lead to a shift back to the historical pattern of dense city cores and concentrated urban activity.

Sprawl, dead? I think that would be welcome. I've made no secret of my deference toward dense, bustling cities. The primary contributor toward this view has been my own experience growing up in the mother-sprawl of them all, Los Angeles. Having almost only known a life where a forty five minute work commute is considered "pretty good" and visiting friends means committing a couple of hours just to drive, I've always craved the convenience of a tightly networked city like Paris or New York that can offer numerous sites and amenities within a relatively small square mileage and not require so much effort just to conduct basic, regular activities. 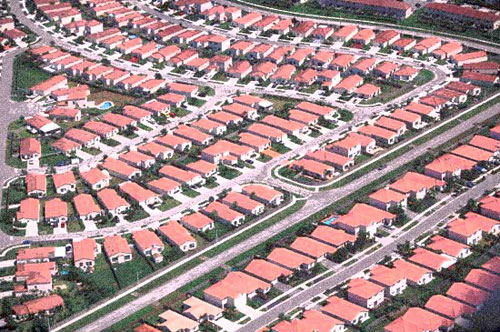 But beyond that, I've always connected sprawl to excess and inefficiency, which in turns distills my argument in favor of urban density down to a simple equation: DENSITY => EFFICIENCY => SUSTAINABILITY.

Densification is something urban planners often advocate for logical reasons. Concentrating population encourages more efficient use of resources, more effective allocation of infrastructure, and easier sustainability. There's a huge embodied energy consequence in laying out of utility and transportation networks over thousands of square miles. Reducing that amount makes the running of a city easier and more efficient. Preventing over-extension of one's resources makes long-term survival easier. So in its very core, density is more sustainable.

While all of this sounds idyllic, it's a lot more difficult to engage this in reality. The American psyche has traditionally striven toward expansion--more room, wider plains, open spaces. The same gears that drove Manifest Destiny influence many people to proliferate suburbia and endure the inconveniences. When it comes to those with families, this allure is even greater. Public perception holds surburbia to have safer neighborhoods, better K-12 schools, and more peaceful environments, and this has historically spurred its proliferation. Sure, the city life may be great for young bachelors or empty nesters or maybe even retirees, but for the larger proportion of people, the city's negative connotations outweigh its conveniences.

So what will it take to truly defeat the alluring dragon that is Sprawl? I believe it will be more than just a downturn in the economy. It will first take a change in popular perception--the relinquishment of the idea that having a front and back yard and a two and a half car garage is absolutely vital to every family's home.  But it will also take a change in how cities are organized. It will take investment in infrastructure that will provide amenities and conveniences to those who live in urban areas. It will need zoning that integrates public and private, to generate vitality and attract contemporary lifestyles.

It will desire schools designed for the future, run by districts that are committed to fostering interactive learning within an energetic environment that encourages creativity and critical thinking. Not the same run-of-the-mill lectures of yesteryear. It will require civic spaces to serve as points of attraction, and green spaces to preserve mankind's inherent urge to connect with nature.

It will necessitate a truly integrated and sustainable effort from designers, leaders, and residents to transform the city into a place for everyone. In a way, if we could take the attractive attributes that are a part of surburbia (and sprawl) and cram them into the city, that might do the trick. But that can only come from smart and savvy design, and that design, inherently must be anchored in the intrinsic concepts of sustainability.