As my plane approached the Sea-Tac airport, we flew low over the city. I looked out my porthole and was amazed at what I saw: green! Granted, the city has a large amount of street trees and wooded parks that make it green, but I was looking at the rooftops. I saw several roofs covered with seasonal grasses, flowers, and a variety of perennials arranged into patterns reminiscent of my mother's quilts. I couldn't help but think of what the birds must think as they fly over, "Where did the buildings go?"

eattle's nearly religious effort to green its city is readily apparent from the sky. A trip up the Space Needle or a flight into Sea-Tac makes it easy to see that the city cares about its footprint and about its people. Green roofs have a number of economical, social, and environmental benefits that make me wonder why all buildings aren't retrofitted with them.

Green roofs are good for the public, the environment, and for private building owners. One of the major benefits that may interest building owners is the potential cost savings. Some roofs have shown a 95 percent reduction in heat gain and 26 percent reduction in heat losses over conventional roofs. There is greater potential for water storage and/or treatment, as well as potential to reduce the size of HVAC equipment needed. Also, the roof membrane is protected by a planting medium, which can double the lifespan of roofing materials. Though vegetated roofs may add cost to a project, that cost can be offset in smaller HVAC units, reduced insulation, and reduced stormwater management elsewhere on the site. Translation: Less money spent on operating and maintaining the building.

There are also money generation opportunities available. If the building is public, a green roof can become an attraction. First example that comes to mind is the Academy of Sciences in San Francisco. People will travel regionally just to see a fantastic green roof.  Property value can also benefit from green roofs. Studies have shown that "good tree cover" will add up to 15 percent to the value of a home. Green roofs act in much the same way. A property owner could potentially charge more rent for offices overlooking a lush garden instead of typical roof. Also, what is grown on the roof could potentially be a money maker/money saver. Herbs, flowers, and vegetables on a roof could save a restaurant costs on fresh produce. The Fairmount Waterfront Hotel in Vancouver saved $30,000 per year in food costs because of what it grew on its roof. 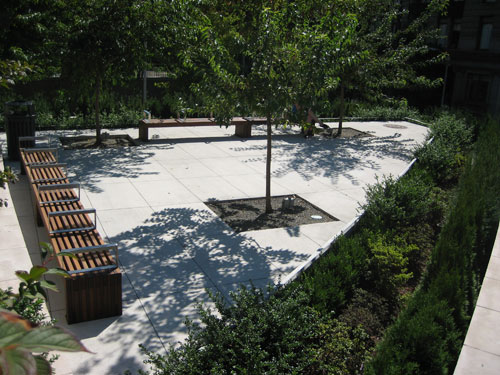 Access [visual or physical] to green space, time and time again, has been shown to have health benefits. People with views or regular access to green space, on average, have fewer physical and mental health problems and recover from illness much faster. Installing a green roof could be what your company needs to boost morale and reduce health care costs. The plants on a roof will filter the air and generate oxygen, making the building healthier to be around compared to others. There is also a potential for recreation atop a roof. Putting greens, planted patios, and picnic facilities all fall into this category.

Lastly, the environmental side of things. As a part of a green-building initiative, Seattle has installed green roofs on a number of its public buildings. The Ballard Public Library and Seattle City Hall both have extensive green roofs that have become known within the city and have helped these buildings earn LEED credits. Green roofs help reduce the heat island effect, lowering ambient air temperature. They can provide habitat for native flora and fauna. They can act as a filtering medium and/or retention system for stormwater, reducing the building's impact on the stormwater system. They also can reduce the building's need to cause pollution in the form of energy production to run HVAC systems.

For these reasons, and many more, I urge designers and property owners to take a lead from Seattle, Chicago, and many other cities, and consider greening their roofs.