A perfect example of optimized solar orientation can be found in Two Journey Medica Plaza -- one of our current projects in Aliso Viejo.

LPA has a firm wide goal that all of our projects exceed California’s Title 24 energy code by at least 15 percent -- and early design decisions about massing, building orientation, and fenestration can have significant impacts on predicted energy use of a project.  LPA's mechanical engineers evaluate our Title-24 performance during the schematic design phase (and sometimes earlier), to provide valuable input to the entire team about the energy impacts of design choices during these critical early stages of the project.

Early on in the design of Two Journey Medical Plaza, the two story building was elevated above the project site and placed on a grid of concrete columns and shear walls to maximize the available area below for a city parking requirement. Once this happened, the design team was able to divide and rotate the building in a manner that optimized its solar orientation. 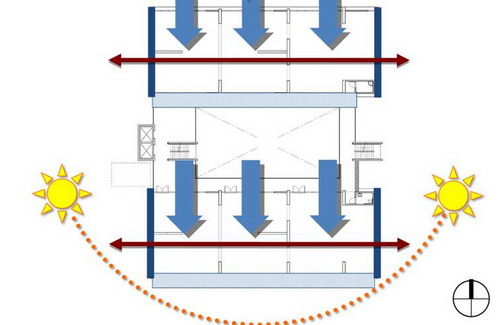 The diagram shows how the building has been divided into two wings that are turned in a manner that places their long dimension on the east-west axis. This gesture maximizes the project’s exposure to the north and the south. This is important because minimal direct sunlight (and the heat gain that comes with it) reaches the north façade and the high angles of the mid-day sun that strike the south sides of the building will be shielded with overhangs, horizontal louvered screens and sunshades.

Since we have maximized the north and south elevations this means that we have minimized our exposure to the east and west. Our mechanical team will be happy about this because the low sun angles in the morning and afternoon are difficult to stop, and excessive glazing on these facades leads to higher loads that their HVAC systems will have to be sized for. With a dimension of 46’ x 117’ (approximately) per wing, the design solution results in a building that has 78 percent of its exterior facing north or south, and only 28 percent facing east or west.

As an added benefit, the division of the building into two wings makes the 46’ depth possible. At this dimension, and with full height glazing on the north and south, sunlight can fully penetrate both wings of the building. Our mechanical engineers will be relieved to see that only four windows face due west for a total area of 30 square feet.

By using the integrated sustainable design process, the engineers really do make us better architects. Thank you team.