A Tasty Twist on a Mixed-Use Development

The four-story, 60,000-square-foot Culinary Arts Academy and District Office (CAADO) building in Riverside, California is the cornerstone of the Centennial Plaza, a block-long development that has revitalized a neglected part of the city.

The project was developed by the Riverside Community College District, which wanted to create a destination that would connect higher education and arts to downtown Riverside, as well as consolidate the district’s offices. Three different buildings with complementary uses, plus a four-story parking garage, were combined into one cohesive project, addressing the district’s vision of creating a cultural and education hub. 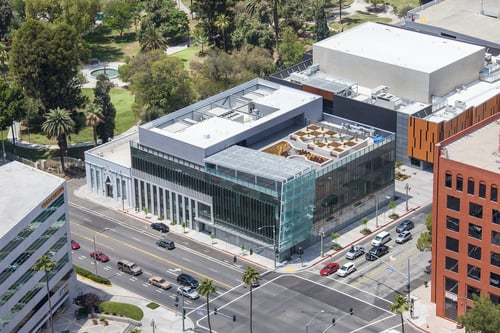 The first phase was the repurposing of a 1920s historic bank building into the Center for Social Justice and Civil Liberties. The interior was gutted to make room for gallery and exhibition space on two floors, as well as new mechanical systems and an elevator. The Spanish baroque façade, which had been covered up for years, was completely restored, providing a strong connection to the city’s rich history.

The complex also includes the Coil School for the Arts, a new home for Riverside City College’s renowned music program. Designed around acoustics and a high-quality music experience, the center includes a recording studio, choir room, a piano lab and percussion studio, over 30 practice rooms and a tunable-acoustics 450-seat concert hall.

The final piece of the puzzle is the Culinary Arts Academy, which takes the cooking school out of a backroom and puts it front and center.

“By moving key programs such as the Culinary Arts Academy and Coil School for the Arts off campus, the previously secluded learning experiences take center stage and engage the community-at-large,” says Franco Brown, Associate and Design Director for LPA. 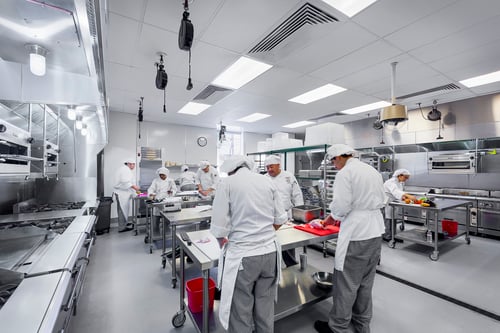 The culinary school covers the ground floor of the building, including a bakery and a 116-seat restaurant open to the public. The design required flexibility and recognition of the different elements necessary to prepare students for a successful career in the food services industry. There are four different kitchens—a large production kitchen, a kitchen for basic classes and a state-of-the-art demonstration kitchen. Customers can watch the food preparation on video monitors.

The second and third floors of the building provide badly-needed office space for the district, as well as the Chancellor’s suite. The rooftop is a shaded deck, with gardens and spaces for events and performances.

The building is clad in insulated glass to maximize natural light and open the activities of the school to the public. A shingled glass tower anchors the design, creating shading and an iconic beacon that lights up at night.

The project opened in 2016 and has already been a hit with the community, as well as school administrators.

“Downtown Riverside has been reinvigorated with the completion of the Centennial Plaza,” Chris Carlson, former Chief of Staff & Facilities Development at RCCD said when the project opened. “The LPA design team executed our vision to tie the arts and the culture of the city while providing an educational resource for the district.”

The culinary academy’s restaurant tripled its business in the first year in the new location. During the school year, the culinary academy’s restaurant is open to the public for breakfast and lunch, Tuesdays through Fridays, and it has earned a reputation among local foodies for tasty, affordable fare. The project earned an AIA Orange County Citation Award 2017 and Community College Facility Coalition (CCFC) Award of Excellence in 2018.