A New Vision for the Sacramento Riverfront

How can the city bring new life to the Capital City’s River District?

LPA designers gathered recently to reimagine the future of the Sacramento waterfront. Only a half-mile from the city’s surging downtown, the area along the Sacramento River is an untapped resource. The Old Sacramento Historic District, the only development on the river’s edge, is dated and underused, separated from downtown by Interstate 5 (I-5), an eight-lane superhighway. 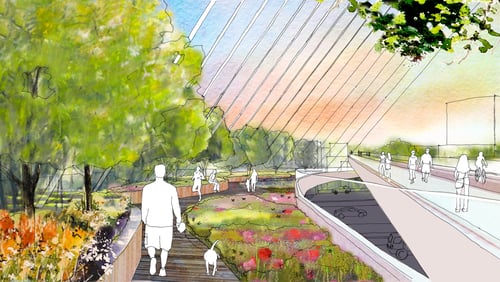 At the urging of Sacramento principal Kevin Sullivan, the LPA design teams from Sacramento and Irvine came together for a vision charrette, to go beyond the current discussion to develop a big idea that could bring new life to the waterfront.

“We really care about this city,” says Sullivan, who has worked in the Sacramento area for 23 years. “We want to get people excited about Sacramento.”

The LPA team represented a variety of disciplines, including landscape architects and urban planners. Their charge was to figure out the most efficient and cost-effective approach to making a lasting, indelible change for the city. What first step could activate the waterfront? Is there one idea that could shift the dynamic and spark developer and investor interest?

The challenges were clear. Sacramento’s downtown is a buzz of activity, surrounding the Golden 1 Center, the home of the National Basketball Association’s (NBA) Sacramento Kings, which opened in 2016. But I-5 is a formidable barrier to the waterfront. Two streets pass over the freeway; the only pedestrian access to the waterfront is through a dark tunnel under the road.

“People don’t like going into the tunnel,” says Andrew Wickham, landscape architect for the Sacramento office. “It doesn’t make a lot of sense to put money into a space where people feel confined.”

It was quickly agreed that an attraction like a Ferris wheel or new commercial district would not be enough to achieve the goal. And a 20-year infrastructure project wasn’t going to be practical for the city. But there was a clear need to link the waterfront with the rest of downtown, the designers decided. 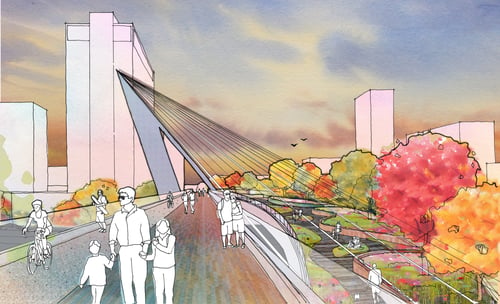 “If we could strengthen that connection it would go a long way toward unifying the waterfront with the urban area,” Wickham says.

The answer was a new pedestrian bridge that would provide a direct link between the waterfront and downtown. The design also calls for new park space on the bridge, which could be a new icon for the city.

“You not only make a connection, you make it a pedestrian experience,” Sullivan says.

The designers dug deep into the details, taking into account the existing infrastructure and the need to make any project cost-efficient. The bulk of the mass of the bridge would be on the downtown side of the river. The main structure is a concrete tower with a glass-box elevator. Cables connect the tower to the bridge, providing structural support for the bridge, without the complexity of trying to build supports on the freeway.

The orientation of the bridge aligns with the current openings that bring light into the tunnel access below I-5. A park would serve as the entrance to the bridge and provide an appealing green link between the existing buildings and the walkway.

“The bridge is designed to touch lightly on the old Sacramento side,” Wickham says. The pedestrian traffic can help support a variety of new uses, including an amphitheater, restaurant zones and cultural centers, as the waterfront becomes a destination and an extension of downtown’s resurgence.

The bridge would also serve as a symbol of the new Sacramento, a walkable city that is growing in the right way. And it can provide a marketing identity for a city attracting new businesses.

“It creates a visual statement that can be seen from around the city,” Wickham says.