A Bold Step for Mass Transit and Sustainable Design 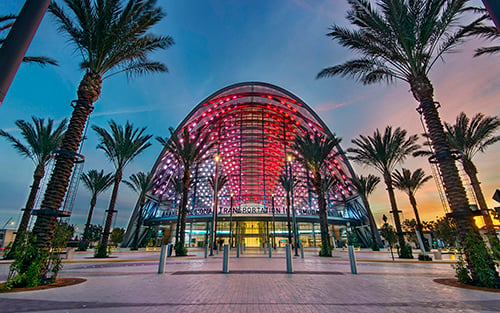 Compared to many other areas around the world, it seems rare when Southern California unveils exciting and striking urban design. It's also less common that we advance our transportation infrastructure (though the past few years have seen greater leaps in that category). But last month saw an instance of both with the opening of the Anaheim Regional Transportation Intermodal Center, or ARTIC.

Located off the 57 freeway in Anaheim, California, across from the Honda Center arena and just east of Angels Stadium and the Disneyland Resort, ARTIC is a transportation hub that links multiple rail, bus, and private transportation lines. Envisioned as a "Union Station" for Orange County, its sleek and soaring design features a sweeping diagrid structure of interconnecting steel pipe arches--iconic to any passer-by. At night, the building lighting package transforms this station into a glowing art piece of changing color, further emphasizing the monumental nature of the building. Clearly, ARTIC is meant to attract the public and encourage using public transportation. 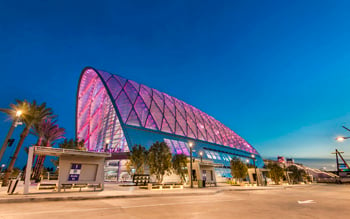 As impressive as this building designed by HOK architects is architecturally, there are a number of sustainable design features that make ARTIC a commendable example of green design. From a site perspective, there is the obvious confluence of public transportation—AMTRAK and Metrolink trains pass through this hub, as do OCTA, Anaheim Resort Transportation, and multiple intercity bus lines. The station is also designed to accommodate potential future high speed rail as well as a proposed Anaheim street car system that connects high profile places of interest in the city. Its location is central to the greater Southern California region, and more locally, within a district of residential, commercial, mixed-use, and tourist use. In addition, the building site itself uses pervious pavers and subsurface filtration for stormwater management.

ARTIC heavily and prominently relies upon new technology to produce a highly efficient and low energy consuming building. The translucent roof is made from gas filled "pillows" made from an advanced plastic polymer called ethylene tetrafluoroethylene, while the north-facing front entry facade is comprised by a towering curtain wall with dual-pane glazing rising up 120 feet. Both allow ample natural daylight to flood the open interior space, reducing artificial lighting loads, while minimizing solar heat gain, thus putting less strain on cooling systems. The HVAC system runs off high efficiency chillers and is aided by a radiant floor cooling system that moderates the indoor temperature. The building structure also features operable devices to allow mixed mode ventilation on mild days. LED lighting, which consumes much less electricity and has much longer operating lives, is used throughout. There are also photovoltaic panels installed at one of the site's parking structures, providing a source of renewable energy.

The building minimized waste to the landfill during construction and contains recycled materials like fly-ash in concrete and recycled steel. The station has low-flow toilets, urinals, sinks, and irrigation to reduce water consumption--an important feature given California's ongoing drought. Segregated waste and recycling bins are also featured to encourage patrons to dispose of products in a more environmentally thoughtful manner.

These sustainability measures enhance the feeling of grandeur that guests encounter as they proceed through the interior space. The natural ventilation and daylighting are emotionally and physically uplifting, and the use of low emitting materials in paints and fabricated finishes also improves indoor health. The spectacular views of nearby points of attraction are quite impressive, and the magnificence of the building scale is relatively unique in a locale not typically noted for high profile civic architecture.

Hopefully, all of this will bring attention and interest to public transportation and sustainable urban design. As Southern California continues to grow, the automobile will become a less and less efficient mode of transport, because the traffic and sprawl increase the time and distance to move from place to place. Perhaps some people have seen freeway signs lit up during rush hour with a route comparison between car and train—the train is often faster. Then, there is all the pollution from the millions of cars in the area sitting in that traffic each day. Mass transportation invariably uses fewer resources per capita than traditional car culture. Although it does result in less flexibility and independence, travel by rail or bus is a more socially and ecologically responsible means of getting around and should be encouraged whenever possible.

Southern California admittedly doesn't have a highly effective mass transit network yet, but ideally, projects like ARTIC will spark more enthusiasm and lead to further growth in that market. What a positive future that would be.

Albert Lam is a Project Coordinator at California-based LPA Inc. He is a LEED accredited professional who specializes in the design and implementation of K-12 schools. Images courtesy of Albert Lam.