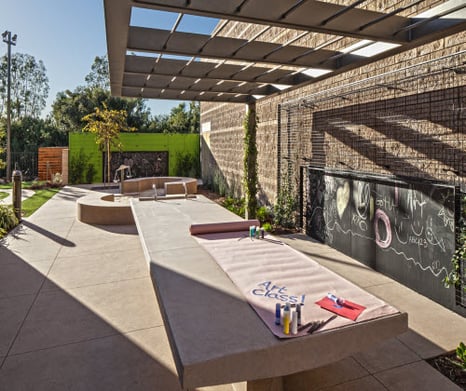 Last month, I had the honor of presenting at a workshop concerning California’s drought and the impending water restrictions. The workshop—put on as a joint effort between the Coalition for Adequate School Housing (CASH) and Schools Energy Coalition (SEC)—was focused on helping K-12 school districts understand what the implications from California’s mandatory water reductions would be and to arm them with some tools and strategies to meet those reductions. The first half of the workshop focused on background information about the drought, Governor Brown’s executive order and which entities are being affected by the executive order. The second half of the workshop brought together a panel of mostly school district facility directors and myself to provide some real-world case studies that show how a school district might reduce its landscape water use.

In California, landscape irrigation is one of the largest water users. For a school district, the landscape can be upwards of 65 percent of their utility costs and is responsible for 40 percent to 70 percent of its water use. Executive Order B-29-15 requires that water suppliers reduce their water demand by anywhere from eight to 36 percent. Institutions, such as school districts, must adhere to these water reductions or face a stiff penalty. As a result, many school districts are being faced with re-thinking how they approach their outdoor spaces. Typically this means replacing ornamental, non-essential turf. The old model of vast expanses of turf grass and ornamental front lawns is wasteful and, frankly, not functional. Turf is a high-water user, requires a lot of maintenance time and money, and is inappropriate for most landscaped areas. In general, turf should be thought of as a lavish use of water for a specific program—think sports fields, flex spaces and play areas. 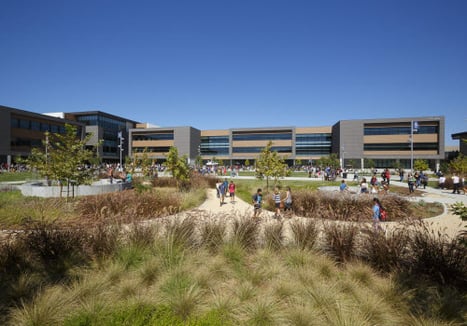 Replacing turf with drought-tolerant landscape design elements is one of the simplest and easiest ways to reduce water use. By replacing turf in non-essential and non-functioning spaces, like front lawns and the areas between buildings, with drought-tolerant plants, a school district can quickly reduce its water demand. Space is at a premium in California—it is very expensive and difficult to buy more land to expand a campus. Intelligently taking over some of these under-utilized turf areas can be a solution for expanding your campus without buying real estate. A school can increase the density of functional space within its campus and at the same time reduce its water demand and maintenance costs—a win-win situation.

Students are spending less time outdoors as their communities are becoming more urbanized and the indoor environment becomes more engaging—think video games, internet, TV, etc. Some students don’t have access to a safe outdoor space at all, so it’s increasingly important to create enriching and robust outdoor spaces in our schools so students will have the opportunity to play and engage with their environment.

As school districts are considering turning off irrigation and allowing the natural watering of lawns until the drought passes (which may take years), I would urge district leaders to imagine the possibilities for repurposing that space. Consider how it can be rebuilt as a valuable outdoor learning environment cherished by students. We are seeing a trend toward taking the classroom outdoors, perhaps in response to a growing body of research which suggests students have less stress, pay better attention and behave better when they have a physical or even visual access to landscape. Turf doesn’t have this same affect. Ornamental turf spaces that re-designed and planted with a drought-tolerant palette can build immense value into a school campus and curriculum. Think of the lessons and hours of activity a school farm could provide, not to mention farm-to-table food. Think of an outdoor playroom, full of creative places for imaginative play. Think of vertical writing surfaces where study groups can collaborate. Or think of a seating area where friends can share a laugh.

This drought may end up being a blessing in disguise. It could usher in a paradigm shift in our education systems—building more value, function and educational opportunities into the outdoor environments, while simultaneously reducing water demand, filtering stormwater, reducing stress and creating a more well-rounded student body.

Andrew Wickham, ASLA is a Landscape Designer at LPA Inc. He is a LEED accredited professional who specializes in K-12 School design.