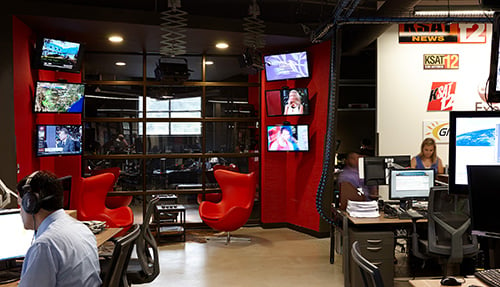 Choosing a location for your company headquarters is no easy task. This space will become the blank canvas to express your corporate branding strategy, build and grow the company and interact with clients and staff. Between browsing for new real estate and considering concepts for renovation, the options can seem endless, and we've often helped our clients in the decision-making process. KSAT-TV has occupied the same studio building since their very first broadcast in January of 1957. In the last 57 years, the KSAT team has grown as San Antonio has continued to grow, and more space was required. Facing a pivotal moment in their history, KSAT needed to make the difficult decision between investing in the renovation of their current location or moving on to an entirely new space. 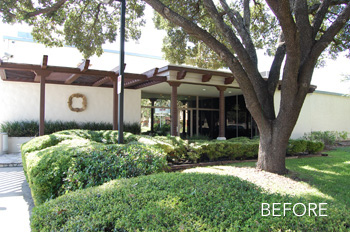 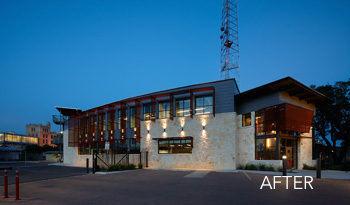 The uniquely shaped piece of property is situated on the northern edge of downtown with views of the San Antonio River. The San Antonio architects at LPA worked closely with our Design-Build partners Bartlett Cocke General Contractors to develop a series of solutions for the building repositioning of KSAT’s Headquarters. The options ranged from small-scale “carpet and paint” type solutions all the way to a “pack up and leave for a greenfield site” type solution. With their 500-foot-tall signal tower, satellite dishes, heritage Oak trees and recently upgraded broadcasting equipment, the folks at KSAT wanted nothing more than to stay put.

The integrated design team determined that the top priority was to provide a new face to the station that reflects their commitment to San Antonio in general and downtown San Antonio in particular. In order to help achieve those goals, the team proposed demolition of two additions (dated 1975 and 1985) to the original structure. A new two-story structure, totaling 15,000 square feet, was then designed to tie into the 1957 studio building.

As is often the case there were some hurdles and challenges involved in working with the existing site. In 2007, the City of San Antonio implemented a Form-Based Zoning District, which is a special district established to encourage a sustainable design pattern of development by concentrating growth while preserving a protecting open space. Working within the strict guidelines was an adventure, to say the least, and required some creative strategies and a handful of variances from the City. 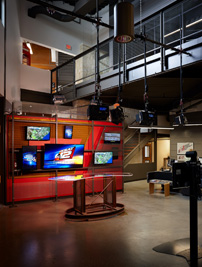 Another interesting development was the discovery that a major portion of the site was located over an abandoned portion of the original San Antonio River channel. This particular section of the river was straightened in the early 1950s. Care had to be taken to minimize the building addition’s footprint from encroaching too far into the channel locations. The potential for a very large and deep foundation existed due to the alluvial soils normally associated with a river channel bed.

The end result enhances the neighborhood, improves the pedestrian experience and fulfills KSAT's desire to have an engaging space that will take them through the next 57 years. Each company must find their unique solution for their corporate headquarters—one that matches their mission, vision and brand. Researching the benefits and potential of your current site is an excellent place to start, and you might find that refreshing the property is the key to elevating excitement and energy among your team.

A version of this story originally appeared in LPA Studies: Palomar College. Sara Flowers, AIA, LEED AP BD+C, joined OCO LPA as an architectural intern in 2002 and has been with the firm ever since. Now an Associate with the firm, Flowers has overseen the completion of more than 20 projects, including corporate facilities and K-12 schools.