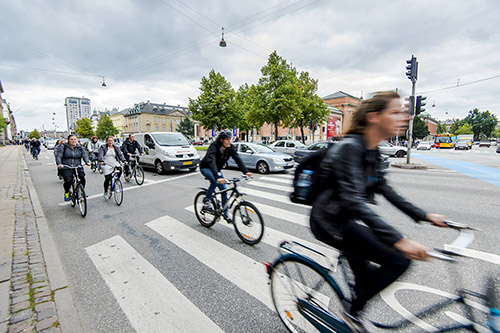 After visiting the public green spaces of Paris, one of the cities I visited was Copenhagen. I had never been before and was eager to experience a new destination. What I found was a wonderful and progressive city full of a wide variety of amenities, kind people, a sense of communal responsibility, and a series of attributes we associate with sustainable design.

Immediately upon exiting Copenhagen Central Station, one notices that this is a biking town. Just outside the station are rows and stacks of bicycles. The city and surrounding suburbs are equipped with an extensive network of bike lanes. Since the Metro system is not quite as dense as, say, Paris, and points of interest are often located a bit longer walking distance than many may find comfortable, biking is very common. In fact, 1/3 of Copenhagen citizens ride their bikes to work or school every day. Here, bicyclists obey the same traffic lights as vehicles, yield to pedestrians and peddle very, very quickly. It was quite a change of pace to be in a city where biking was a standard and very legitimate form of transportation — something that green design certification systems like LEED are merely striving to achieve. 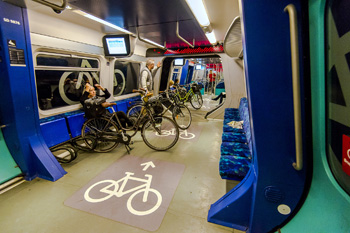 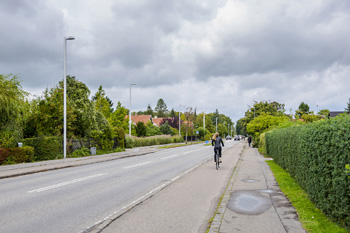 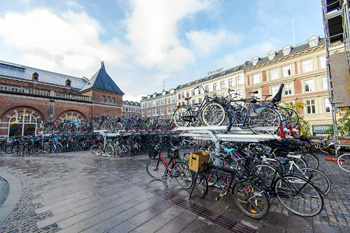 Although the light rail system isn't as compact as Paris', it's still quite an extensive network. Rather than focusing a vast majority of its coverage within the heart of the city, the network extends out of the city and into numerous suburbs in the local area as well as up and down the coast. The combination of the Copenhagen Metro, the city S-Trains, and DSB Øresund form a very convenient way to travel in, through, and out of the city, drastically reducing the need for an automobile. Also commendable is the fact that the trains commonly have bays devoted to bicycles, allowing denizens to bring their bikes on board, take the train to a more distant location, and then continue their journey on pedals afterward.

Much like Paris, Copenhagen also has its fair share of public green spaces, though not nearly to the extent of the City of Lights. The Botanical Garden offers a very scenic and naturalistic park space for guests to enjoy, with flower gardens and wooded areas and ponds and streams creating an oasis in the middle of the city. The city's many old buildings often have courtyards with fountains and little green spaces — pleasant little surprises to a city trekker.

And perhaps most striking to me was the use of wind power in Copenhagen. Off the coast, one can easily discern rows of towering wind turbines on the water itself, constantly rotating with the slow but steady winds coming off the Øresund sound. Standing like ecologically-friendly sentinels, these impressive structures are an iconic part of the Copenhagen waterscape. This is Middelgrunden, an off-shore wind farm that itself delivers 4% of the power to the city. As it turns out, Denmark is a leading producer of wind energy (supplying 30% of the country's power) and leading exporter of wind harnessing technology.

This is not a recent advancement. Denmark began investing heavily in renewable energy three decades ago after the Energy Crisis of the 1970s. Originally heavily subsidized by the government, the initial capital expenditure on wind energy has since greatly been reduced. Though citizens of Denmark do apparently pay higher rates for electricity to help offset some of the subsidies, the result has been a cleaner environment due to reduced emissions.

All of these factors combined have presented Copenhagen as a remarkably progressive city seemingly well ahead of many other cities at home. Admittedly, this has required two underlying themes:

1) Expenditure in sustainable design strategies was made many years ago, and though initial implementation may have been inconvenient (as these things inevitably are, starting off), the Danish investment has certainly paid off and will only continue to improve in the return category.
2) There is a willingness to put the communal greater good ahead of one's self interest — a vital component to making green strategies work. Instead of driving, people are willing to bike, which in turn has led to further investment to improve biking amenities. Understanding that this will be beneficial toward the future, citizens are willing to pay a little more upfront to finance renewable resources and lay infrastructure to make the system more self-sufficient down the road.

I personally find this admirable and very much in the spirit of sustainable urban design. Natural resources are being preserved for future use and enjoyment, and although some upfront concessions are made, the long-term reward outweighs the short-term "hassle."

But these measures seem to be successful. Denmark was voted the world's happiest country in 2013, and Copenhagen routinely tops lists of the happiest cities. I think it has very much to do with the sense of collective responsibility and belonging, which align very much with the principles of sustainability. If this model can spread more prolifically all around, I think our future can be a healthier and brighter place.