Making Infrastructure Green to Save Green

Here's an encouraging sign for the future of sustainability in cities: according to an article in the November 13th-19th edition of The Economist ("Trees Grow in Brooklyn"), New York and Philadelphia have unveiled large scale plans to increase green surface area within their cities. Which means natural vegetation on rooftops and streets, permeable hardscape to treat urban runoff, improved air quality, and cleaner cities--all while spending significantly less money than comparable public sewer projects. 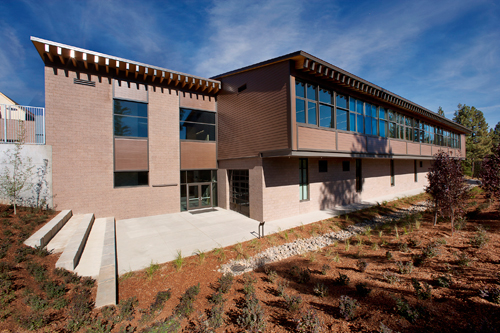 In the Big Apple, $1.5 billion has been set aside for green technology to implement this action, while $2.9 will go toward underground tunnels and tanks to store and filter the water. This may seem like a grand amount, until it's compared to the $6.8 billion a traditional system would have cost to meet recent improved water quality standards. These roof gardens and bioswales will take much less time to install and go into effect. Plus, they have the added aesthetic benefit of looking nicer and creating a fresher, more appealing city environment. An example of green infrastructure might be as simple as a curbside garden on an otherwise barren sidewalk. More intensive measures could feature large scale pervious paving and other permeable surfaces that replace more traditional concrete and asphalt.

Meanwhile, the City of Brotherly Love is currently working to approve a $2 billion, 25 year plan that aims to vegetate at least a third of the city's current impervious surfaces, allowing a significantly higher amount of natural rainfall to percolate into the soil, filtering itself in the process, as opposed to gathering contaminants along streets and sewers on its way to city treatment plants. This, combined with recent heightened water regulations, demonstrates a clear attention toward stormwater runoff management. Cities like Kansas City, Milwaukee, Washington D.C., and Portland share similar goals.

The technology for these types of works has been on the market for a while. Manufacturers create grass pavers that can handle greater loads than concrete, while crated roof garden systems no longer require excessive depths and extra, reinforced roof structure to hold a significant amount of additional weight. Green water treatment strategies avoid having to carry water to treatment plants, where an overflow might (and often does) end up diverting millions of gallons (or more!) of untreated water into nearby waterways. And from a city health and comfort perspective, a bird's-eye view of a verdant field of leafy bloom is certainly more appealing than the gray aerial "blandscape" that many metropolitan areas currently sport.

While local codes may be slow and stubborn to adapt to these newer technologies, the plans in New York and Philadelphia suggest that city planners--conscious of ever-growing environmental concerns--are starting to change previous views. At the same time, it behooves all projects to integrate these types of systems as natural aspects of their designs. Whether it be a green roof atop an office tower, park-like streetscapes in downtown or bioswales and natural cisterns on a school campus, these simple and  sustainable gestures can go a long way toward making the built environment seem softer and more inviting.