Dreaming Up a Greener Future

Here's a fun game of "Guess the Designer."

Give up? I'm not talking about renowned masters like Frank Lloyd Wright or Le Corbusier, or modern icons such as Rem Koolhaas or Renzo Piano, but rather about Walt Disney, a man most famous for movies and theme parks but also a visionary who held a surprising interest in social and urban development. In fact, it's quite interesting to contrast parallels between many of Disney's dreams and the goals of today's sustainable mindset. 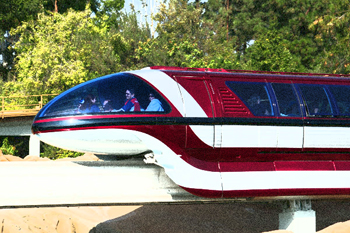 Perhaps Walt's earliest contribution to society was the Disneyland monorail, which opened in 1959.  During a time and place where car was king, Walt foresaw an eventual need for alternative mass transit. Although the monorail has never reached significant popularity in the United States (it's actually pretty prominent in other parts of the world, like Japan), it has been installed in several U.S. cities; Las Vegas might be the most prominent example. And at Walt Disney World, the monorail system offers such a great way to get around from the Magic Kingdom to EPCOT to several of the resort's hotels that one wonders why it hasn't been expanded to include other itineraries on property.

There's also the original concept for EPCOT. Far from the "Educationland" theme park many see it as today, the original Experimental Prototype Community of Tomorrow was meant to be a progressive approach to urban planning, with a radially organized system anchored by a dense city center that gradually opened out toward a greenbelt to provide a connection to nature, an industrial park buffered away from the vibrant core, and nearby farms and food labs to make the city self-sustaining--with plenty of alternative transportation in the form of monorails and people-movers to take residents and guests in, out, and around town. Sound like concepts many designers champion today? Indeed, this project, the original inspiration for even creating a "Disney World," called for proximity between where people lived and worked, leaned away from automobiles as primary transportation, championed expanses of green space to retain the natural environment, and embraced new technological systems for basic infrastructure. 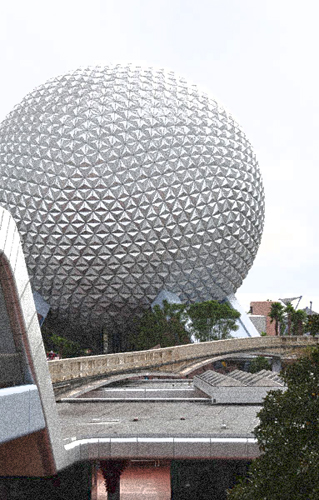 While Disney World has grown to be noticeably different from this original concept, it has retained some of these characteristics. In addition to the monorail system, there is also a network of buses and ferries that shuttle people around the resort, offering guests bountiful alternatives to driving. Every park also rests on top of a basement level used for transporting equipment and supplies and running utilities, all behind the scenes. The resort is tremendously green--literally! Many first time visitors (myself included) comment on how natural everything is and how there are trees everywhere. Indeed, Disney designers wisely paid attention to water management and crafted a web of waterways and canals to control the water level and minimize the effects of the developmental footprint. Leaving most of the forests and wetlands around the resort in their pristine condition decreases erosion and lessens the effects of flooding.

And when it comes to resources, the theme is reuse, energy saving systems such as central plants and alternative power reduce the electrical and heating load for the whole resort; sewage treatment uses water hyacinths to naturally absorb pollutants and clean water; water reclamation is practiced on an huge scale across the 25,000-acre resort; even food grown on site is used in restaurants on site--something that's highlighted in educational attractions, of course.

Now, these items might be discounted because they occur at a theme park and not a "real city," but Walt Disney World basically is  a real city. What I find fun and fascinating is how these were ideas that Walt contemplated decades ago. Think of what things might be like if other cities embraced these ideas (and more) along a mass scale? Imagine what our cities would be like today if everyone had explored similar ideas back then? Perhaps we'll find out in 30 years. We now more value ideas like working with the site and integrating sustainable features intrinsically within new projects. But the greatest lesson I take from this is the power of drive and commitment. Sustainable ideas can come from anywhere, and with the proper dedication, anyone and any place can create a more sustainable environment for the future.