Yesterday, we began our discussion about Building Information Modeling benefitsand experiences. Lets continue right where we left off, with more about the mindset changes required in transitioning from a two dimensional drafting program like AutoCAD to a three dimensional "smart" modeling platform such as Revit. 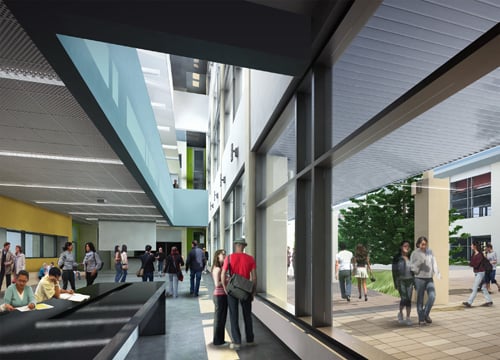 Revit Encourages Construction Knowledge
What makes BIM different from regular 3D modeling is the fact that in a program like Revit, a wall actually carries information relating to its composition, finish, and construction, whereas in a regular modeling program, a wall is just a colored shape that happens to look like a wall. To me, this suggested that a Revit model couldn't simply look like a building; it had to be virtually constructed in a manner similar to actual building construction. For example, a building with masonry block should have its CMU walls continue below grade to the foundations, not simply sit on top of the concrete floor slab, while a stud framed stucco wall should also include a concrete curb on top of the floor slab for the studs to sit on and the sheathing to continue over. It behooved me to acquire as much knowledge of materials and methods as I could, so that my models could reflect the anticipated built condition as accurately as possible.  I regularly consulted with the construction administration people within LPA. The result: in less than a year, I learned more about detailing and building assembly than I ever did during college. This wouldn't have happened so aggressively if I was still thinking about building documentation in 2D and not pondering how components of my buildings were coming together in 3D, even before the construction documents phase.

Multiple Disciplines Can Be Integrated into One Model
Revit started out as a platform aimed toward architects, but it has since expanded to offer software for structural, mechanical, electrical, and plumbing engineers. Traditionally, the largest coordination headaches have been caused by trying to make sure different disciplines --documented on different sheets-- were not conflicting with each other. Ducts running into beams ... equipment sitting over an area without any structural support ... pipes cutting through footings ... these were inevitably common occurrences that could result in costly change orders once they were discovered on the field.

When multiple disciplines share Building Information Modeling, however, these issues can be caught before the first pile of dirt is ever excavated. Revit itself has a feature called Collision Detection that will inventory a list of all condition where items in the same model or between two or more linked models run into each other. Furthermore, outside software such as NavisWorks can be used to determine similar issues and categorize them in additional detail. This exercise is currently being applied to one of my current projects, a brand new high school to be built in East Long Beach. Hopefully, this will drastically reduce the number of in-the-field conflicts and smooth the construction process, preventing situations such as, say, having to lower a ceiling below a window line because the air conditioning ducts above the ceiling had to duck under a steel beam that was deeper than the designers realized.

Final Thoughts
BIM inherently fosters a spirit of collaborative integration among traditionally disparate trades.  Certainly, this method of documenting buildings is not without its learning curves. The fact that everything is connected means moving or deleting some items may have unforeseen impacts. Programs like Revit also have their own quirks in how elements are modeled, joined together, and assigned parameters. It's easy to be sucked into the mindset of modeling solely for accuracy and efficiency and forget to actually design (thus, I'm don't mind waiting until DD or CD's, when the focus is more on documentation, before transitioning to Revit from something like SketchUp or CAD). BIM also requires a front-loaded schedule: there is a lot of set-up that must occur initially for sheets, notation, and of course, the actual modeling. Plus, the model itself may be poor at first as designers transition to a new software and a new way of thinking about documenting buildings, but this should improve over time with familiarity and lessons learned from past mistakes.

Ultimately, though, such inconveniences do not override BIM's greatest benefit --that front end effort will pay off over time as inter-disciplinary efficiency and integration solves problems that would otherwise arise during actual construction. If anything, they reinforce the issues that are better pondered earlier than later, saving time and money in the long term by minimizing often-overlooked errors. After all, BIM designs a building in a virtual world. With such powerful software, a team can create the prototype on computer, so that the real thing in the real world gets it right.