During my recent trip through Europe, I had a chance to spend a couple of days in the wonderful city of Barcelona. And being architecturally-inclined, I made sure that one of those days was devoted to visiting and exploring the works of one of my favorite architects, Antoni Gaudi. Best known for such fantastic and awe-inspiring projects as Casa Batllo, Casa Mila, Parc Guell, and of course the otherworldly Sagrada Familia, Gaudi was renowned for his bold execution of the Art Nouveau style in Spain, which resulted in unique, almost dreamlike wonders of architecture. 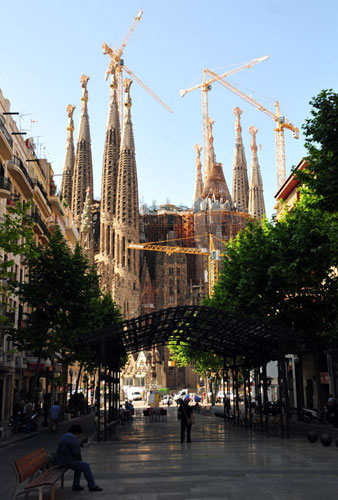 While touring these sites provided a spectacular thrill, I couldn't help but notice various ways in which Gaudi demonstrated an acute sensitivity to nature.  Although it would be silly to call him a pioneer in green design, Gaudi nonetheless shared many links with the principles of sustainability. So I thought it might be fun to come up with a list of Top Five Reasons that link Gaudi to Sustainability:

1. Awareness of Natural Lighting Principles
LEED Indoor Environmental Quality credit 8 would be proud. Gaudi was distinctly aware of the value of natural lighting within a building and took measures in many of his projects to ensure that the interior spaces could be as well light via natural means as possible. Casa Battlo featured a multi-story penetrating light shaft that allowed sunlight to filter in from the rooftop skylight, while Casa Mila had multiple interior courtyards that reduced the apartment floor plate and drew light into as many rooms as possible. Today, these same ideas are integral aspects of many sustainably designed buildings.

2. Integrated Design
Working in a time before building-making became specialized and branched out, Gaudi touched upon multiple aspects of the building process throughout all of this projects. The exterior architectural design was typically his most noted contribution, but Gaudi also melded interior work seamlessly into his creations, while supervising actual construction and guiding the fabrication process of the builders. He paid great detail to the structure of many buildings, often intertwining it with the architecture, most notably within the Sagrada Familia, with its massive tree-like columns and catenary arch structures. While Gaudi didn't necessarily control each field on a personal level, he recognized the importance that each played on the next, and thus managed his projects in a holistic way that ensured interdisciplinary collaboration. It's an ideology that integrated design firms, such as LPA, employ today.

3. Importance of Public Green Spaces
Gaudi's most well known public work was Parc Guell, a large urban garden park overlooking Barcelona, designed to provide a clean, tranquil space for the people, away from the dirt and pollution of the modern city. A lifelong believer of the importance of maintaining a connection to nature, Gaudi knew that green space was important to the psyche and vitality of a city. His sculptures, architectural features, and gathering spaces within the park all worked to attract people to an energetic landscape that conveyed the refreshing attributes of the natural world. These ideas remain a key part of today's sustainable urban design. 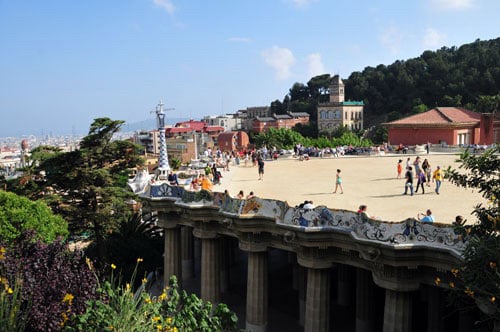 4. The Ultimate Mod Project
Casa Batllo is amazing and fantastic enough on its level, with its sculptural interiors, organic facade, and masterful play of light throughout its rooms. It's even more amazing when one considers that this was technically a modernization project--a remodeling of an existing house for wealthy Barcelonan patron Josep Maria Jujol. Gaudi was not above taking on the challenges of existing conditions and turning them into extraordinary results. The task of working with the existing design was not a hassle. Likewise, today, the idea of transforming existing buildings into new designs goes hand in hand with green design, since it saves many of the resources required for new construction and often is a cheaper alternative for the client. Re-adapting existing works is beneficial for the environment, and Gaudi proved that it didn't have to be incompatible with striking design.

5. Borrowing from Nature's Own Precedents
Finally, perhaps the most significant connection between Gaudi and sustainability wasn't what he did, but how he thought. Having developed a love and appreciation for the natural world at a young age, Gaudi recognized the benefits of the environment and often relied upon nature to supply him with the answers to his design issues. The ideas, including organic tree structures, catenary curves, hyperbolic shapes, fresh air, and light, all stemmed from his belief that nature should be intrinsic in everyone's lives. Thus, nature informed the look and execution of his designs. And ultimately, mimicking nature is the base of sustainable design, because nature perfected this process long ago, and it only makes sense to go with that which has literally sustained the planet for its entire existence.

So while it might be a stretch to outright claim that Gaudi was the first green architect, it's not so farfetched to trace what he had in common with designers who advocate green design today.