Lessons From Nature: Putting Water Use in Perspective

While I was in Switzerland, one of the many incredible places I visited was a UNESCO World Heritage Site named Trümmelbach Falls, an astonishing cascade of glacial water partially enclosed within a mountain. What I found was a spectacular force that highlighted the furious strength and power of Mother Nature-a waterfall of such ferocity that moist vapor saturated the very air itself and liquid thunder reverberated everywhere I walked. 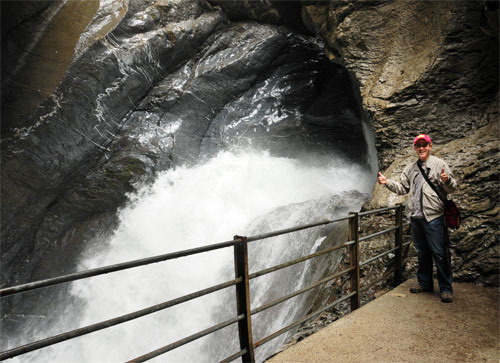 Mere photos cannot describe the breathtaking wonder of such a natural force, although I have tried to do so with the accompanying snapshot. My first reaction to this impressive sight centered somewhere along the lines of, "Goodness [insert profane interjection here], that's a lot of water!!!" It was borderline incomprehensible to me to observe such a massive volume of water being exhausted. But once I had some time to [literally] soak up the scene, I got to thinking about water use in general.  Exactly how much water do we consume on a daily basis? I decided to research some numbers to see how things stacked up, and the results certainly surprised me.

According to the information provided on site, this cascade of water sheds 20,000 liters of water per second during peak season,(1) owing its immense volume to the glacial drainage plains of three of Switzerland's most well-known mountains, Jungfrau, Eiger, and Monch. This unbelievable figure extrapolates to more than 456 million gallons of water per day. Imagine that many filled milk jugs hurtling down a cliff daily! It's certainly a staggering statistic. Amazingly to me, however, this pales when compared to water use in the United States.

The EPA estimates that Americans use, on average, 100 gallons of water for their daily purposes.(2)  Multiplied against a U.S. population of 300 million,(3) that equals 30 billion gallons per day, or more than 65 times as much water as Trümmelbach Falls at its peak. Then there are numbers for non-residential water use, such as 136 billion gallons per day for power plants and 142 billion gallons daily for agricultural irrigation, which ups the multiplier to around 300 each!(4)

Of course, it's not quite fair to compare one waterfall to an entire nation, but even when juxtaposed against Southern California's 24-million-person population,(5) the resulting 2.4 billion gallons per day number still dwarfs Trümmelbach Falls by more than five-fold.

Now, this isn't intended to serve as hysteria-inducing propaganda. Rather, I present these statistics to urge people to think for a moment about water use in their daily lives. Be Water Wise estimates that a person who turns off the faucet while brushing teeth can save three gallons of water each day, and shortening showers by one or two minutes can save five gallons of water per day.(6)  The first step can save a population the size of Southern California 72 million gallons a day, while the second ups the savings to 120 million gallons.

This has shown me that water conservation is definitely an important concern. At the same time, while the amount of water we use can appear staggering, it's not that unreasonable to change a few habits and accomplish significant savings. I've never believed that sustainability required only extreme measures, but I do think it's important to think about how we tread on this Earth and act to minimize detrimental effects. If anything, connecting some dots between Trümmelbach Falls and general water usage has given me a new perspective on the importance of water efficiency, and I hope it can do the same for my readers.