Doing More with Less: A Timeless Idea for Integrated Design 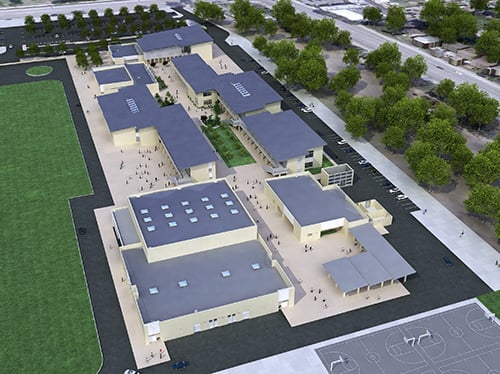 With the end of 2013 approaching, two events this year illustrate how much the A & E industry has changed in the last twenty years—while some things never change as it relates to sustainable design and energy efficiency.

Just last week, we were working to clear out an area in our office when we came across an award trophy from Southern California Edison (SCE) that was dated 1993. It was given by SCE for LPA’s Irvine Ranch Water District (IRWD) Headquarters in Irvine, Calif.  The award program was specific to energy efficient buildings, and unfortunately discontinued after a few years. I attended the last program in 1993 when IRWD was given the award.

We often talk about IRWD as one of LPA’s early sustainable projects. The project used reclaimed water for irrigation and was one of the first in California to use reclaimed water for all flushing fixtures. The building’s energy features—which were cutting edge at the time—include occupancy sensors, daylighting controls, thermal energy storage, 100% economizer and a high efficient chilled water system, all of which are strategies still used today. The building design was shaped by

solar orientation and the overall performance bettered Title-24 by 50% in 1992. The project’s sustainable quotient was a model for the region long before the idea of sustainability was broadly introduced to the country with the Leadership in Energy and Efficient Design (LEED)-NC rating system, which premiered in 1999.

Finding the award helped put the recent LPA awards at the 2013 Orange County Chapter (AIAOC) design award program into context. The AIAOC has institutionalized sustainability in their awards program with two categories that recognize the connection between sustainability and design excellence.

The Committee on the Environment (COTE) and Savings by Design (SBD) categories did not exist twenty years ago. The AIAOC is following a general trend as similar programs exist in almost all local Components, State and National AIA. This speaks profoundly to the mainstream acceptance that sustainability has within the industry and the general public.

Today, the timeless design practice of designing according to solar orientation is paired with a large rooftop PV array. The idea of having a PV array on the building’s roof would not have been affordable or even considered twenty years ago. The PV panels at McBride High will supply more than 50% of the project’s energy needs and with all the other conservation measures, the school is designed to perform 75% more efficiently than the baseline allows.

These are remarkable statistics and part of why we are so excited about where the integrated design process is leading our firm. At LPA, the partnering of our in-house engineers and architects make sustainability not an additive or subtractive component but part of the building’s DNA.

The idea of energy efficiency and sustainability as interchangeable with design excellence is the best hope we have for a sustainable future that creates projects and buildings that “do more with less”—more design and less resources.

Dan Heinfeld, FAIA, LEED AP BD+C and President of LPA Inc., leads the design direction of the firm and has done so for more than 30 years. As a pioneer in the sustainable building movement Heinfeld is passionate about sustainability and its importance in the process of informed design. More than 500 major design awards attest to LPA's commitment to design excellence. LPA provides services in architecture, sustainability, planning, interior design, landscape architecture, engineering, and graphics.